Mariss Jansons: I am ashamed of Munich

Friends of Mariss Jansons say he may quit the Bavarian Radio orchestra over the city’s backtracking on its promise to build a new concert hall.

It has emerged that BR were not consulted by the authorities before the decision was taken, although the Munich Philharmonic was. Boih Jansons and his orchestra are taking this snub to heart.

In an interview with Die Zeit, Jansons was asked about Munich and its musical reputation. He said: ‘I’ve been ashamed of it for years.’ 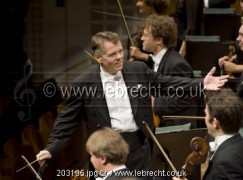