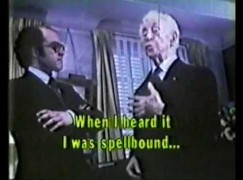 Death of a Rubinstein protégé, aged 64

The American-Italian pianist and conductor Jo Alfidi has died in Belgium, aged 64.

The Queen of Belgium, a fan, paid for his piano studies in her country. In 1972, he came third in the Reine Elisabeth competition. His DG recording of the Rachmaninov D minor concerto impressed Arthur Rubinstein, who became an important mentor, sharing a TV documentary, Arthur Rubinstein and the Young – Joe Alfidi & Arthur Rubinstein.

But the public career fizzled out and he wound up as a professor at the Conservatoire in Liège.

Munich decision is ‘a severe blow’ for classical music »