Russian media have announced the death of Countess Yoko Nagae Ceschina, a Japanese harpist who married a wealthy Italian businessman and spent much of his $190 million inheritance on classical music projects.

She provided the funding for the New York Philharmonic’s spectacularly ill-advised visit to North Korea in 2008 and she became one of Gergiev’s most reliable supporters. She also bought a violin for Maxim Vengerov. Two months ago, she received a state honour from Vladimir Putin. 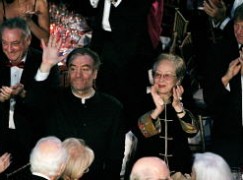