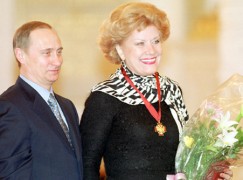 We’re getting reports of the death of Elena Obraztsova. The great mezzo-soprano was 76.

She was having medical treatment in Germany.

Born in Leningrad during the siege, Elena came to attention in a 1963 Boris Godunov at the Bolshoi. She performed and recorded extensively abroad with Karajan and Abbado, for whom she opened the 1977 La Scala season in Don Carlos. In 1978, she filmed Carmen opposite Plácido Domingo in a Franco Zeffirelli TV production.

In 2007 Obraztsova she became artistic director of opera at the Mikhaylovsky Theatre in St. Petersburg, resigning after a year though maintaining her links with the theatre.