Dresden, home of anti-Islam demos, applies to be Europe’s city of culture

The city’s application for the title has gone in for 2025, by which time the Mayor, Helma Orosz, hopes Dresden will be seen as a bridge between east and west, rather than a barrier. Reacting to the latest Pegida rally, she said: ‘This is not our town, what’s happening here.’ 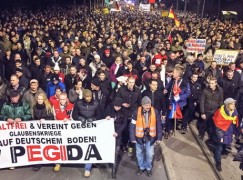