Regular users of Broadcasting House will have come across the lovely and helpful Phil Hutchinson, whose life ended tragically last weekend. 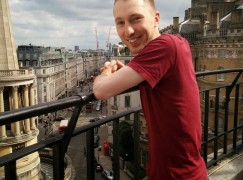 photo and text: Marianne Khoo:
Phil Hutchinson, died on Saturday in a car accident in Canada. Only a few days before Christmas he’d asked if we could pair up to do some long routes in the Cuillins in May. He was kind and goodhearted and clever and brave, and there were so many adventures he looked forward to having in the new year. I took this photo of Phil several months ago when he asked me to smuggle an ice axe and several ice screws into the BBC’s Broadcasting House one Sunday afternoon, after which we had tea on the roof. Please feel free to share and use this photo of Phil amongst friends.