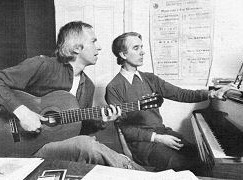 Patrick Gowers, a brilliant composer who was disabled by a stroke a few years back, has died aged 78.

Among various concert works, he wrote a terrific guitar concerto for John Williams and a Toccata for organ for Simon Preston.

His film work, starting with Peter Brooks’s Marat/Sade in 1966, was distinguished and original. It included David Hockney’s A Bigger Splash and Tony Richardson’s Hamlet.

He may be most widely remembered for television music for Smiley’s People, Thérèse Raquin and The Woman in White.