What to say when you’re asked, ‘Is classical music dying’?

I was asked the question yesterday by a Classic FM camera team at the opening of the Bristol Proms, an event that is trying to break the straitjacket formality of concertgoing.

The answer that sprang to mind was: ‘if classical music is dying, then you’re doing it wrong’.

If the audience wont’ come, choose another audience.

If the hall is morbid or forbidding, change the venue.

And don’t – whatever you do – call it classical music.

Every label you attach to music diminishes it. Genre is history. People in the 21st century talk of ‘my music’, not some marketing category.

The global interest in music has never been higher – this website is proof of that. Just get out there are bring makers of music together with those who crave it. 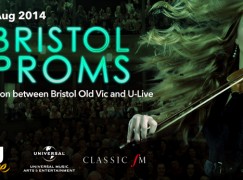