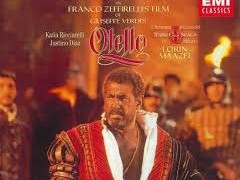 The singer has just issued this statement:

I am deeply saddened by the death of Lorin Maazel, one of the most significant conductors of his generation. His brilliant mind, which allowed him to conduct a vast repertoire, was known to everyone in the world of classical music, and he was as much at home in the opera house as in the concert hall – not to mention the fact that he was an accomplished violinist and composer.

I had the opportunity to work with him on many occasions that were important to me in my career – first in the recording studio, especially in several Puccini operas, and then in the theater, beginning with a memorable series of performances of Verdi’s Luisa Miller at Covent Garden in 1979. We did La Fanciulla Del West at the Teatro alla Scala. He also conducted the sound tracks for the film versions of Carmen, directed by Francesco Rosi, and La Traviata, directed by Franco Zeffirelli, in which I participated.

Lorin will be greatly missed by all of us who knew him, and I extend my deepest condolences to Dietlinde, his wife, and to his children.