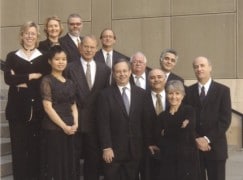 Tough times: Chicago chamber musicians give up the struggle

(Chicago, IL – 6/27/2014) The Chicago Chamber Musicians (CCM) announced today that CCM will discontinue all artistic activities as of the close of its current fiscal year on August 31, 2014 and will not present a 2014/2015 season.  In making the announcement, CCM’s Board of Directors expressed its deep gratitude to the CCM ensemble artists for 28 years of glorious music making and to its loyal base of subscribers and funders for their long standing support of chamber music in Chicago.

CCM Board Chair Michael Woolever commented that, “While CCM filled an important niche in Chicago’s musical scene for many years, numerous factors have made it more and more difficult for CCM to avoid operational deficits in recent years and CCM leadership decided to take a prudent approach and suspend artistic operations while we continue to be solvent.”

CCM ensemble member and former Co-Artistic Director Charles Geyer added, “It has been a pleasure and privilege to be a part of CCM for 17 years and perform with this complement of excellent musicians. CCM led the way, when Chicago had virtually no chamber music series, to today where the city enjoys multiple groups and programs. I am grateful to our musicians, Board, staff and individual and institutional donors for making it possible to provide Chicago and beyond with 28 years of great chamber music performances.”

Comment by Lawrence Johnson of Chicago Classical Review:
Founded in 1986, CCM enjoyed one of the highest profiles of local music organizations in the late 1980s and 1990s, commissioning new works, presenting adventurous programs and garnering laudatory reviews for its virtuosic and polished performances.

CCM began as the resident ensemble of WFMT and inaugurated its free First Monday Series concerts at the Chicago Cultural Center. The ensemble created its first subscription series in 1988, and last season presented 12 concerts at Pick-Staiger Concert Hall in Evanston and Gottlieb Concert Hall in Chicago.

In a brief phone conversation Friday, Woolever said that CCM was carrying about a $100,000 shortfall on a $700,000 annual budget.