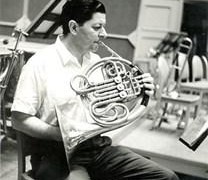 Dianne Winsor, principal flute in Valladolid, writes: ‘He was an impeccable figure of authority during my student years in Boston & at Twood, supervising all BSO hiring, auditions, rehearsal arrangements.

He had a stern demeanor – his black patent leather hair glistening as he watched over the orch. But he was a kind & fair man & is, to this day, my ideal of all that a fine orch. personnel manager should be. Rest In Peace, dear Mr. Shapiro.’

« Tough times: Chicago chamber musicians give up the struggle