You read that right.

Germany is spending US $1.75 billion on arts and culture.

(No question who’s winning this war.)

And the new minister Monika Grütters (left of Chancellor Merkel) says art must take risks and hurt people as well as pleasing them. 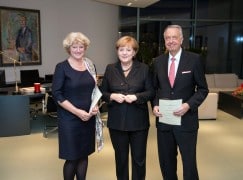