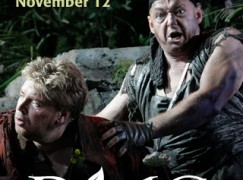 Seattle has just announced it is releasing the 2013 Wagner Ring on 14 CDs, digital download and online streaming.

Given the parlous state of commercial recording, it is hard to envisage another Ring appearing on record.

The Seattle 14-CD box set is on pre-sale from today at http://seattleopera.org/RingCD, price $150.