Exclusive: ‘It wasn’t my fault they couldn’t sell the $45 million Strad’

David Aaron Carpenter, who lent his playing skills to the hype machine that sought to sell Peter Schidlof’s viola, has been thinking over the unfortunate result. He has come to the conclusion that the reason the sale failed in the showroom lies in the modern auction method of canvassing sealed bids. Here’s his report, exclusive to www.Slippedisc.com 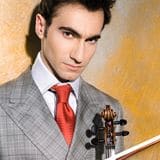 A few months ago, I received what turned out to be one of the most transformative calls of my career: Tim Ingles from Ingles & Hayday informed me about the imminent sale of the mythical “MacDonald” Stradivari viola of 1719, followed by their request to have me perform on it for Sotheby’s press conferences in New York and Paris.  Of course, to be considered as the musical ambassador for such an important musical instrument is one of the greatest honors ever bestowed upon me, both as an advocate of the viola as a solo instrument as well as a collector of fine musical instruments. My answer to Tim was obvious, at no cost to his company or Sotheby’s.  In fact, neither I nor my family’s company would have any financial emolument in its sale; we actually spent our own money travelling around the world to represent the viola and produce a concert at Sotheby’s in NYC in May featuring the viola alongside my orchestra, Salomé, performing on 8 Stradivari instruments.

And such began my adventures with the “MacDonald.”  My first interaction was in April, half an hour prior to the New York Times reporter and videographer interviewing and having me perform a movement from Bach’s Suite No. 5 (a video now at over 100K views on YouTube).  The setup on the “MacDonald” had not been altered since Peter Schidlof’s family left it in a vault in London almost 3 decades ago. The strings were not optimal, the neck was antiquated and too thick, and the viola sounded still dormant.  All things considered, the experience was both uncomfortable and magical.

When people ask me whether this Stradivari is the best-sounding viola I’ve ever played, my response is “it ranks among the best.”  I am indeed a lucky musician in that I am fortunate to own and play on an 18th-century Venetian viola by Michele Deconet, the best sounding instrument I have come across. However, this was not always the case, and it took me a few years to optimize the sound of my viola, much like it would with the exceptional “MacDonald.”  It would take a career to understand the complexity of sound inherent in the “MacDonald” viola, and any violist would be thrilled with such an opportunity. 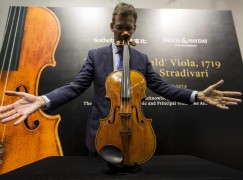 In light of the failure of the viola to sell via sealed bids at Sotheby’s, many musicians, collectors, and interested parties have expressed their opinions about the price of the viola in the context of the fine musical instrument market.  Reading many of these posts indeed inspired me to describe the behind-the-scenes process in greater depth.  By enlisting Sotheby’s to sell the instrument, the Schidlof family was hoping to draw from the company’s massive rolodex of collectors of art and rare collectibles, for whom a whopping $45 Million opening bid is not extraordinary.  To put this in the context of contemporary art being made today by artists like Jeff Koons, Damien Hirst, and Gerhard Richter, paintings or sculptures made yesterday are commanding even higher prices with an ever-expanding supply. Of course musical instruments are there for musicians, for us to express as best we can great works of music, but at this level they are something else as well – works of art, pieces of history.

It is also worth remembering that Stradivarius instruments were expensive throughout history. They were always difficult to afford for musicians, who typically relied then as now on the generosity of patrons to buy them and gift them their usage. The rarity and beauty of the “MacDonald” is unsurpassable, even by other great Stradivari instrument standards, and the price tag, while theoretical, was in some ways justified. The family has received world-record offers in the past but for whatever reason was not ready to sell.

With the benefit of hindsight, the issue with the sale of the “MacDonald” had nothing to do with the merits of the actual instrument or fine musical instrument market in general; rather, it was the mechanism by which the sale was conducted.  Sealed bids via a large auction house is a hybrid process, which oftentimes leads to a sale in limbo.  While highly publicized, something typically associated with auction sales, it is a non-transparent, uncompetitive method of selling which could antagonize a likely bidder.  The other issue is that of the opening estimate: what is typical of an auction sale is a lower estimate organically driven up by market forces.  Had the “MacDonald” started at a lower estimate, and either remained a quiet private sale, or a very public auction format, the instrument would have been sold–I state this with 100% certainty.  Perhaps the high estimate was justified in the minds of Sotheby’s and the Schidlof family because they received world-record offers in the past from top collectors, and the instrument market has blossomed since those offers were made.

Another criticism I’ve heard about the process of selling the “MacDonald” is the ‘over-hyping’ of the instrument in the press.  Given that I had nothing to do with pricing the viola, the only way to generate buzz for the sale was to actively publicize the unprecedented nature of both the instrument and the price.  I like to think that I was an extremely fortunate musician to have the privilege of playing on the “MacDonald” and speaking publicly about its merits. Deciding upon repertoire to showcase the viola on major TV networks also proved to be quite difficult, as the studio microphones distorted solo Bach and Mozart Duos, which is why given the short time spaces allotted I tended towards short showpieces.

But, again, I am honored to have used every mechanism at my disposal to have publicized this wonderful Strad and, through the publicity it attracted, the viola in general. The championing of the viola, an endlessly fascinating instrument that is rarely given its due, is a cause to which I dedicate most of my waking hours, and if having a viola played on much-watched outlets like Bloomberg, Fox, NYT.com and the rest has encouraged new people to go to a viola concert, or to take it up, or even to compose for it, then at least part of my mission will have been accomplished. Regardless of the results of the “MacDonald” sale, what this story did for both the viola as a solo instrument as well as gaining visibility for the fine musical instrument market to precisely the collectors who are comfortable spending tens of millions of dollars on visual art, is priceless–akin to the viola itself.

In response to my fellow musicians who take issue with the exorbitant price of the “MacDonald” I pose this: had the estimate been placed at $5 million, or even $1 million, would that have really made it more accessible for us to acquire?  It isn’t a secret that the fine musical instrument market has seen an uptick in prices because of the rarity factor and because of economic forces well beyond our control.  In the past decade, tangible assets have appreciated because of global fiscal dynamics (i.e. inflationary risk, overvalued equities, etc.) and have made fine musical instruments a stable asset class in and of itself.  At a purchase price of $45 million, this viola would have been expensive for an individual worth billions of dollars, or even a corporation or government willing to preserve its cultural heritage.

The target buyer for the “MacDonald” and for other great high-value instruments are not necessarily players; they are people who buy them as investments, as art pieces, and who typically have a strong sense of patronage.  I speak from both personal experience as a player, and as a lover and collector of instruments, and as someone who has taken it upon himself, through my family’s company, to create a lending program that pairs patrons with musicians who are being priced out of the market for old Italian instruments. Because, as musicians, we completely understand the frustration of musicians who are being priced out of the market to acquire rare instruments, and that has to be tackled resourcefully and directly.
The response to the auction of the ‘Macdonald’ was incredible, and there were inevitably negative as well as positive reactions. It is as we all know easy to post negative comments on social media platforms without the full story. But these are important and in some cases complex issues, too important for the facts to be obscured. For my fellow musicians, there are ways to get access to fine old instruments if this is indeed your objective. One way is to inform and educate prospective patrons to purchase an instrument on one’s behalf.

What will become of the “MacDonald” now?  Had I the same opportunity that Peter Schidlof had to pay off a long-term loan at a lower price, I would be honored to be the instrument’s next custodian.  I hope the viola does find a home outside of a vault, and that it is heard and seen by audiences for generations to come.

I leave with fond memories of one of the greatest musical experiences of my lifetime:

« Met musicians play at schools. Why can’t Met Opera do that?

Just in: Salzburg shuts talent factory as sponsor pulls out »