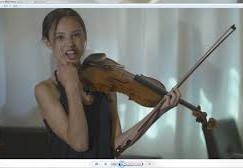 How Silicon Valley’s #1 violinist went from busker to billionaire

Gabi Holzwarth, 24, dropped out of a dull job and went busking on the streets of Palo Alto, California.

Today, she’s playing solo gigs for the moguls of hi-tech. She has played for BitTorrent, NetApp, Samsung, LinkedIn and Google, once even forming a duet with Snoop Dogg. She now has a mogul boyfriend.

Word is, she could be the next Lindsay Stirling. How did that happen?

Gabi’s story: When I first began busking, I performed a list of classical pieces with my violin alone. This became repetitive, so I had the idea to begin playing along to different genres of popular music. I went to Guitar Center, told them my idea, and asked them “What equipment do I need to make this happen?” An hour later I departed the store with an amplifier and a pickup, and I was ready to go. The next day, I brought this to the streets. People loved it, and managers asked me to plug in front of their stores in order to draw people in. People stared at me with a look of both surprise and joy, often letting me know “I have never seen anything like this! But why are you on the streets?!” “You’ve gotta start somewhere!” was always my response.

I ran into one interesting situation at Trader Joe’s, in which a “No Soliciting” sign was put right in front of me urging people to “ignore the solicitor”. But the masses always win – I continued to play and my loyal fans petitioned the manager to move the sign. Things took off from here, and soon I was asked to perform for private events all over the bay area. In just 6 months, my schedule is now packed as I perform at both private and public events throughout the bay area in homes, restaurants, clubs, museums such as the deYoung, and even tech companies like Google, NetApp, Synopsys, LinkedIn, BitTorrent, GigaOm, and Uber! It has been a whirlwind 6 month start to my career and I am so excited to see how far I can take this!

Amira’s no threat yet to heart-tugging Jackie Evancho »