What's the full financial situation at the Met?

The Metropolitan Opera’s press department, also known as the New York Times, has filed a report saying the company has enjoyed a record year in fundraising – all the more remarkable an achievement in the depths of recession. The Times calls it ‘astonishing’, ‘whopping’ and ‘bonanza’ – excessive even in press release language.

Whatever, hats off to the development director, Coralie Toevs, who has reeled in the big fishes. 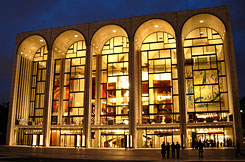 However, my mole in the finance department tells me that the running costs are far higher than previously revealed, with Peter Gelb’s movie spend running up eye-watering bills. Others in the building have been muttering similar things. I am trying to lay hands on hard budgets.

My guess is that Gelb will soon bring out a fully audited set of figures whose red lines will look a lot softer now the donations look so healthy.

« Most expensive musical haircut of all time