Gidon Kremer: why I quit the celebrity ratrace

The great violinist has sent me the original, private letter that he sent to the Verbier Festival, announcing his withdrawal. I publish it with his permission and with that of Martin Engstroem, the Verbier director to whom it was addressed.

Kremer took offence when Verbier announced that he was cancelling because he was unwell. In fact, his grievance appears to lie deeper, in the way the few super-famous classical musicians are exploited. It is the first coherent declaration of dissent to the celebrity culture in classical music.

I present the letter verbatim, in the original English:

Today, unfortunately I have some upsetting news for you. After many weeks of questioning myself, and a barrage of conflicting thoughts, I have finally decided to withdraw my participation in this year’s Verbier festival.

While I do not want to hurt you, I can only imagine how disappointed you will be. Please believe me, when I say that I really do not have any other choice.

We all get older, this is a fact we can’t deny this and this somehow demands more responsibility towards our actions. It concerns as well the important question of where and why we say “yes” or “no”.

It is wonderful, that Verbier provides so many opportunities for young musicians to share the music. I especially value the enthusiastic work of the Festival orchestra. I am also aware of how important it is for you, to celebrate all your friends birthdays and anniversaries. And among these highly valued performers are also some of my own very dear friends.

Nevertheless the question to myself remains: what am I personally doing on this summit of “names” and both old and new celebrities? 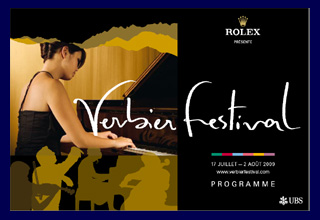 Having all my life served music and composers, a repertoire which is established as “classic” and one which, for decades I had to fight for to be heard, I now feel that I need to make a choice. I simply do not want any more to be part of “parties for the sake of parties”. To be one of a group of so many splendid artists is not something that I want to justify or confirm.

Some decades ago an American newspaper wrote a contradicting but ironic punch-line about me: “he is so much out, that he is in”. Time has come for me to feel, that I want to be “in” in everything I am doing. It is not easy for me to explain why, but I do feel that in Verbier, I am an “outsider”.

You would wonder: “Gidon! How can you say such a thing, being surrounded by so many friends, who respect you, who love to play with you, who look up to you? Aren’t you aware, that I myself have admired you for years?”.

Dear Martin! Please do not draw any wrong conclusions.

I am not putting up barricades because of any ambitions or desire to look at everything as a snob, as many critics do! – With their prejudice, so to say- “from above”. – No way.

I simply do not want to breath the air, which is filled by sensationalism and distorted values.  Lets’ admit – all of us have something to do with the poisonous development of our music world, in which “stars” count more than creativity, ratings more than genuine talent, numbers more than…. sounds.

This summer I have decided, after 30 years of full commitment to conclude my activity for the Lockenhaus festival. For three decades, I served the cause and can only be grateful for having had so many friends who also follow that spirit. Music itself was and remained the core of this festival, which can be proud to have given an opportunity to thousands of musical scores to have been performed. It was and remains an oasis of intimacy, in size and in orientation.

Now, finding myself rather exhausted through my numerous tours, new projects and recording sessions, I feel even more, that I should do only the things which I believe myself are still somewhat necessary. And here it is: I simply do not have enough energy to support gatherings and collaborations on highly exposed stages with “rising” or approved stars of today’s music business for the sake of ovations and name-dropping.

Yes, I know, I should be professional. Most of my life I tried to stick to my word (and I am aware that promised you that I’d come) but a time has now come in which the overall devaluation of the word “interpreter” has resulted in a misguided fixation with glamour and sex appeal.

This is not anymore “my” time. I leave it to those who believe in it, be it the audiences or the new bread of performers, who have overwhelming capacities to please crowds, but who are often themselves quite EMPTY and artistically lost, chasing a hunger for recognition over ability.

Not being a hypocrite, I simply need to gain some distance and rest from all those “fireworks”. This is the only reason that I have made this decision to step out, since I do not want this to add to the overall confusion, which has established itself within the music market in recent years.

I wish you a productive summer full of joyful meetings and “great performances” which every evening, you will announce at the usual gatherings, in circles of artists, hosts and friends.

I hope that you not only sell plenty of tickets, but as well promote the image of the festival itself, which can be honored to have such a great music lover and salesman as it’s “artistic director”.

I wish as well some day, that you find some distance from all those musicians, who use the given opportunity to share and SERVE music by simply showing up and “enjoying themselves”.

Many festivals these days unfortunately allow mixing self-enchantment with entertainment – (be it crossover or “events”) and they succeed to remain a magnet for all those, who want to be seen or hailed.

Yes I am a bit ironic and with a bitter feeling in saying these words;

REAL artists like those that we still remember, haven’t vanished completely. But the “greenery” of Verbier rather contributes to forgetting them and hails mystifications and substitutes of those, who truly served ART. Opposing such a tendency, I simply want to find peace with myself. Lately being warn out by so many dissatisfying partnerships, I simply need a rest. I do hope this will be the best remedy for the hype that surrounds many of us.

I want to conclude with these well known words from a song used by my favorite composer Robert Schumann: “Ich grolle nicht”.

Not being driven by a desire to blame anyone, but rather by self–protection (if there is still something to protect!), I need to apologize once more to you and to all those artists and friends, whom I was supposed to play with, for my inability to attend Verbier festival this summer.

Please forgive me for breaking my word and believe me, this is done to allow me to remain loyal to myself, and above all to music, which I still love.