First, they meddled with the voice tracks to stop contestants singing flat.

Now, a violinist on the so-called talent show is accused of playing over a pre-recorded track by the girl-band, Bond. It is not yet established how much she is playing along to the track, using it illegitimately as wallpaper, and how much sound she actually makes. A forensic engineer should soon sort that out.

The alleged miscreant is Alexandra Parker, 22. The judges thought she was wonderful on TV and the show drew an 11.5 million audience.

But Eos Chater, a Bond member and mate of mine, recognised the track as Gypsy Rhapsody from their second album Shine. Bond, playing at the Guildhall Saturday night, ‘ got bombarded with messages of people saying someone was playing a bond track on BGT,’ says Chater.

She’s in with the lawyers today and I should have more details soon…. One way or other, the show is tainted all over again.

If Ms Parker did what she is alleged to have done, it is unlikely she could have done so without the knowledge and connivance of the show’s producers. Watch this space. 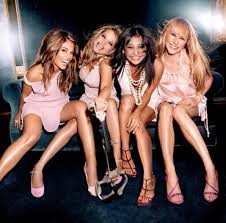 original girl band, Bond
And here‘s the Daily Express puff in Ms Parker, in ‘an eye-catching leather bra’. Click the link.
Oh, all right. Here it is.