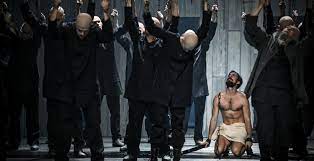 Can the darkest moments of life also lift our souls? Drawing on his own experience in a Siberian prison in the company of misfits, murderers and thieves, Dostoevsky was inspired to write his novel Notes from a Dead House, telling his brother at the time: ‘Believe me, there were among them deep, strong, beautiful natures, and it often gave me great joy to find gold under a rough exterior.’

In Janáček’s hands, Dostoevsky’s inspiration and the raw material drawn from an appalling world of incarceration find an even more powerful form of expression in his last opera, From the House of the Dead which is streamed on Slippedisc courtesy of OperaVision.  Unfettered by conventional story-telling, Janáček wrote his own libretto, freely weaving together a series of stories of everyday prison life and of the fates of individual convicts. The cast is exclusively male and made up of a collective, rather than of interacting soloists; a chorus opera from which individual speakers step out to tell their tales. The longest monologue of all, Šiškov’s, told in the quietness of the prison hospital at night, is emblematic of the whole opera: a harrowing tale constructed around a transcendentally gentle theme, just as Janáček’s own compassion threads through and transforms his grimmest and yet most uplifting opera. Despite an oppressive finale, Janáček wrote at the beginning of the score, ‘In every creature a spark of God!’ And this is this spark that inspired the National Theatre in the composer’s home city of Brno, to connect Janáček’s last opera with an equally distinctive work, his Glagolitic Mass. Janáček said of his Mass : ‘I wanted to capture here faith in the security of the nation not on a religious basis, but on a moral, strong one, which takes God as a witness.’ This live stream from the heart of Janáček country – offering a staged version of the Glagolitic Mass as a continuation of From the House of the Dead in a new critical edition by Professor John Tyrrell – should bear new testimony to the power of faith in man and to the genius of their local composer.

The opera is conducted by Jakub Hrůša  and directed by Jiří Heřman.