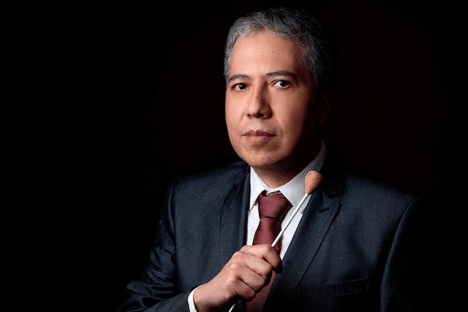 The National Symphony Orchestra of Mexico has named Ludwig Carrasco as its new artistic director.

He succeeds Carlos Miguel Prieto, who held the baton for 15 years, and he is recknoned by cognoscenti to be the best available, which is not always the case in Mexican appointments.

Here’s the rather florid announcement:

The National Institute of Fine Arts and Literature (Inbal) has concluded the process of consultation, dialogue and definition of the replacement of the Artistic Direction, as well as a new work program aimed at strengthening the National Symphony Orchestra (OSN).

With the definition of the new Artistic Direction, which will now be headed by maestro Ludwig Carrasco, a new stage begins in this musical group. Mtro Carrasco was appointed by the director general of the National Institute of Fine Arts and Literature, Lucina Jiménez López, in use of the powers granted to her by the decree creating the Institute, after conducting a dialogue process that began during the health contingency for COVID-19 and that it will continue during this new period.

The dialogue promoted by the Institute with members of the musical group was not only focused on appointing a replacement in the Artistic Direction of the OSN, after the conclusion of a 15-year cycle under the baton of maestro Carlos Miguel Prieto, but also towards the elaboration and analysis of a project that allows strengthening the role of the Orchestra, as the main musical group in Mexico, expanding its national scope, strengthening its links with other musical systems, with youth in the process of training, with the schools of its own Inbal, instance of the Ministry of Culture of the Government of Mexico, as well as the promotion of the relationship of the OSN with musical diversity in the country.

Through its various collegiate bodies, including a Transition Commission that was formed to have channels for participation, members of the OSN have worked closely with different instances of the National Institute of Fine Arts and Literature. The dialogue intensified due to the pandemic, since the group and institution collaborated on several virtual projects, in addition to updating the website and the different tools aimed at disseminating relevant actions that took place during the 2020 and 2021 cycles.

Biz news: Universal bites off half of Harmonia Mundi »