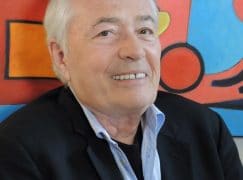 The inspirational Czech conductor Libor Pesek died last night in hospital in Prague. He was 89.

Libor lit up Liverpool like no musician since the Beatles.

Arriving as principal conductor in 1987, he found a demoralised orchestra in a depressed city and transformed the mood within months. No-one knew how he did it but a smile returned to musicians’ faces in rehearsal and it broadened afterwards around the bar. He was, at one level, convivial and collegial and, at another, instantly uplifting.

He started with a Mahler cycle that grew into one of the most compelling of its time. He performed Suk’s Asrael, a Czech masterpiece pratically unknown abroad, as well as the Dvorak symphonies, some Bruckner, much Brahms. In his suitcase he took Elgar and Vaughan Williams back to Prague. His performance of Britten’s Sea Interludes from Peter Grimes is engraved in memory. He made numerous recordings.

The whole city took him to its heart. At the Adelphi Hotel I saw him embraced by dockworkers and pub drinkers. We talked deep into the night and sealed a profound friendship. He was music director in Liverpool from 1987 to 1998, departing in tears when the orchestra ran into administrative and other difficulties.

Born in Prague on June 22, 1933, he had vivid memories of the German occupation and maintained a quirky independence under Communist totalitarianism. Aside from Liverpool, he held posts with the Prague Symphony and the Czech National Symphony orchestras. From 1981 to 1990 he was a regular guest with the Czech Philharmonic. In later years he was involved with the Slovak Philharmonic in Bratislava. His laconic humour was not always translatable.

Heavens, he will be missed.

Our warmest sympathies to his son Philip, his partner Jarmila and all the family. We understand there will be no funeral, just a private gathering in his Prague garden. So Libor.

Sandra Roberts of the RLPO adds:
It is with deep sadness that we learnt that our “colleague” Libor Pešek KBE died yesterday in Prague. Without doubt he lifted the RLPO to international heights whilst principal conductor for ten seasons from 1987. I remember clearly my first tour with the Orchestra in October 1988, when he took the Orchestra to Prague and to quote him, “to show off his new love” to his home city. Taking an orchestra pre-Velvet Revolution was no easy task but his determination won, and it was a great success. From there the happy relationship between Libor and Liverpool grew.
His famous quips in rehearsals were collected by musicians and printed in a collection called “Linguistic Gems and Quotations”. In fact, even today the occasional quote can be found scribbled inside some of the RLPO music parts. He conducted for over 70 years and said one of his proudest moments was when he took the RLPO to be the first non-Czech orchestra to open the Prague Spring Festival. His parties were as much a highlight of any tour as the concerts that he gave with the RLPO around Europe, America and Asia. The recordings they made together are still played today and he introduced much hitherto unknown Czech music into the veins of Liverpool Philharmonic. In 1992 he insisted that the repertoire for the American tour include Suk’s Asrael Symphony, not a popular choice according to the tour agents but he won the audiences on the East Coach of the US over with his commitment to the work. His philosophy for life was basically to enjoy it and share that enjoyment with friends. He addressed everyone as colleague in a most warm, friendly way that everyone who met him liked him immediately. A humble man who adored his dogs and Land Rovers, and since retiring from conducting at the age of 85, grew closer to nature more each year. He last conducted in Liverpool for his 80th birthday in June 2013 and gave over 300 concerts with the Orchestra in Liverpool and worldwide.