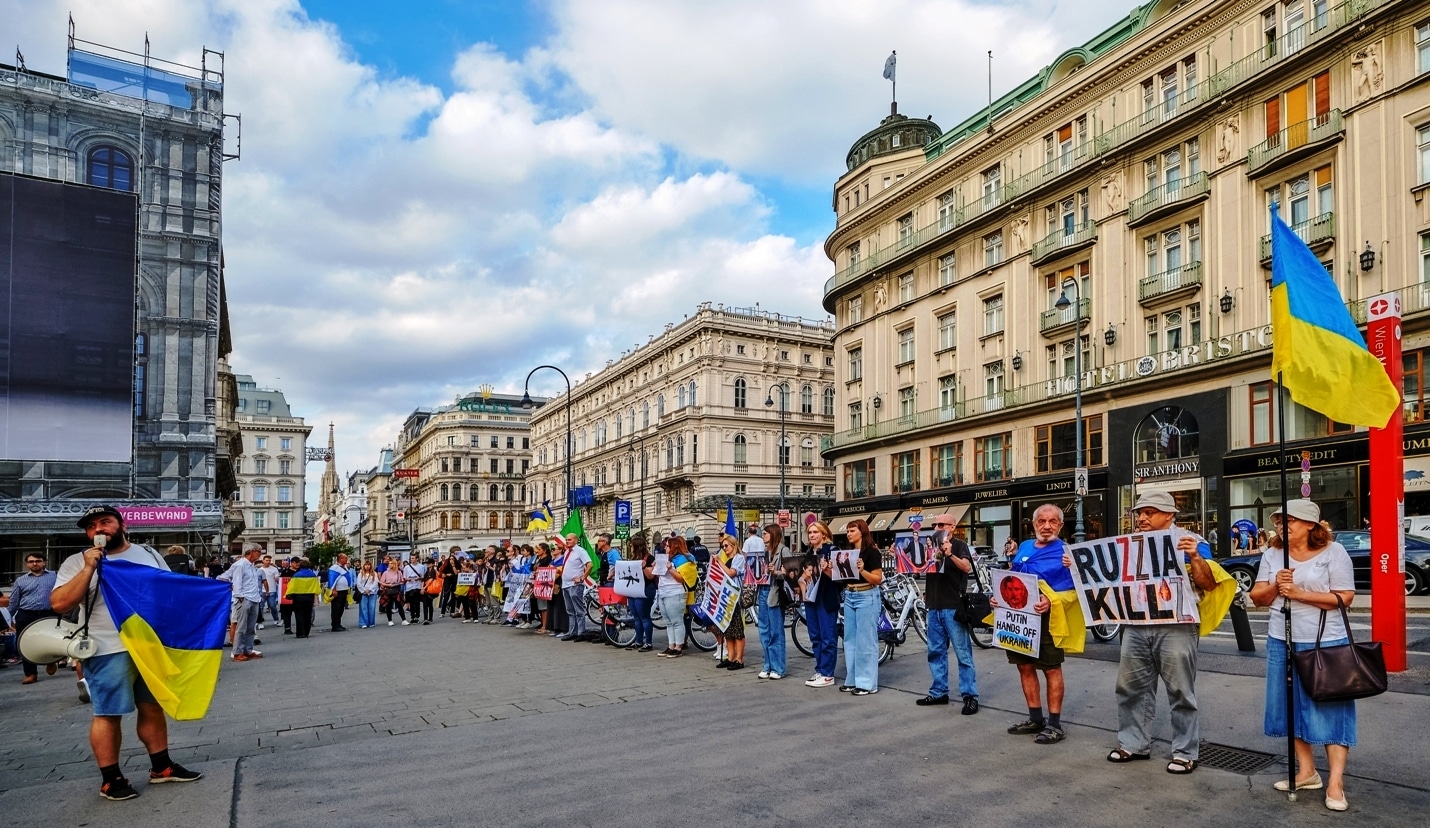 Larry L. Lash reports exclusively for Slipped Disc from a demonstration outsie the Staatsoper as the Russian soprano made a sold-out return. Photos by  Iryna Karpenko: 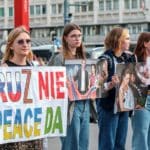 “We are not against Netrebko”, said Mykhailo Karioti though an amplified bullhorn. “We are against war, against propaganda”.

The native of Lviv in western Ukraine was addressing audience members arriving at last night’s opening of the new season at Wiener Staatsoper, a last-minute substitute performance of “La bohème” with Anna Netrebko and Vittorio Grigolo as Mimì and Rodolfo.

Karioti was supported by at least 50 people in a single-file line stretching the length of Herbert von Karajan-Platz from the Ringstraße to the opera house’s stage door. Many were displaced Ukrainians, some draped in the now-iconic yellow-and-blue flag of their homeland, all carrying placards and photos suggesting the Russian soprano’s lack of clarity and support of Vladimir Putin’s “special military operation”.

For 80 minutes, I held aloft an enlarged photo of Netrebko and pro-Russian separatist Oleg Tsaryov, grinning as they stretched the flag of Novorossiya, a bouquet of roses tucked under the soprano’s arm with husband, tenor Yusif Eyvazov, peering over her shoulder.

Keeping within Vienna’s guidelines for authorised demonstrations, the volume of the amplified speeches was so low they were almost inaudible against the street noise. Passers-by stopped and snapped photos as men and women took turns speaking in German, Ukrainian, Russian, and English. Among the onlookers was 89-year-old real estate magnate Richard Lugner, often referred to as Austria’s Donald Trump, who slowly strolled the length of the line.

While she made a statement against war in general, Netrebko’s ambivalence has led to many opera houses and concert halls closing their doors to her, particularly notable being New York’s Metropolitan Opera and Munich’s Bayerische Staatsoper.

The questions most repeated during the demonstration were “Against what war? Who started it? Who is responsible”? Netrebko remains mute on all of them. Others asked why she will not say the word “victim” or acknowledge that children and old people are being killed, let alone by whom.

Karioti was also dismayed that many Austrians believe that America instigated the war, and that Ukraine dropped the first bombs and holds Russians in concentration camps. “They say Ukraine must surrender”.

An elderly Austrian woman showed a sign which stated “Netrebko is not political but she donates money to terrorists”. Another poster showed a caricature of the diva against a red background, not with musical notes but missiles streaming from her mouth.

The demonstrators remained peaceful, even when a woman arriving at the opera repeatedly screamed, “You are against music! Bravo Netrebko” in a shrill voice, raising a middle finger. Another woman confronted a speaker with such threatening words that she was quickly encircled by police who led her away. A brief chant of “Schande Netrebko” (“Shame on Netrebko”) was offered in return.

“It’s a shame for opera, for Vienna to invite this woman to sing” opined Ada, a business and economics university student accompanied by her sister, Martha, born in Vinnytsia in west-central Ukraine. “It’s time for Europeans to say which side they’re on”.

Martha held a handmade sign in English: “Too Sensitive For Vienna Opera”. She clarified that in social media, people too quickly deem content such as Netrebko’s silence on the war “too sensitive” and concentrate on money and pleasure. “They are not interested in the lives of others”, she said. “Germans and Austrians say that prices have gone up because of Ukraine. We find this disrespectful”.

At 18:25 bells inside the opera house announced the impending start of the performance. The demonstrators sang a stirring, emotional rendition of the Ukrainian national anthem before dispersing.