Conductor is in trouble with his name, and his no-names

The Greek-Russian conductor Teodor Currentzis tried to draw a line under his Putin financing by announcing a new orchestra, called Utopia. Its opening performances will be heard next month in Vienna’s Konzertahaus and Berlin’s Philharmonie.

Berlin’s Tagespiegel has remembered that the city already has an orchestra called ‘Utopia’. Founded by Mariano Domingo, it has been playing since 2008, bringing together musicians people with and without disabilities. Tricky, to be using the name of a disability charity.

Next, Currentzis has claimed he has broken with his Russian sponsors, the Putin bank VTB and the energy supplier Gazprom, which is promising to freeze the nuts off western Europe this winter. Even though he was pictured with them only this month.

Meanwhile, Currentzis refuses to name the shadowy backers of his new Utopia. For all we know, the finance may still be coming from front organisations for Russia’s war backers.

So if you go to hear Utopia, best to leave your conscience at home. 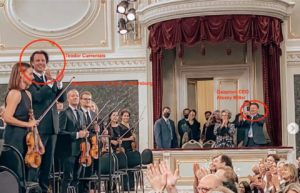