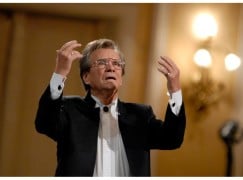 Barely noticed either at home or abroad, the vastly respected conductor Vladimir Fedoseyev turned 90 this weekend.

Never an attention seeker, Fedoseyev was among the most reliable performers of Russian music, with a career that encompassed Moscow, Vienna and Tokyo.

« Anna Netrebko will sing from next month in Vienna