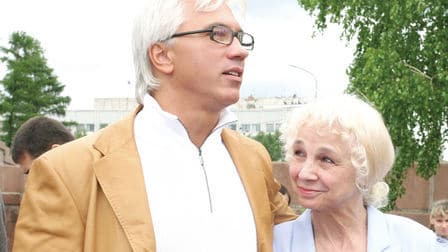 Dmitri Hvorostovsky was my best friend

The record producer Anna Barry has written a moving and evocative memoir of the great Russian baritone, whom she recorded from first to last. Anna’s essay is included in the booklet of Eloquence’s new box of Dima’s Philips recordings.

… Krasnoyarsk was still at that time a closed city, closed not only to all foreigners but also to most
Russians. Dmitri’s agent Elena, for instance, had never been allowed to go there. I would like to say that I made a favourable impression on arrival at Krasnoyarsk airport, but the reality is, Dmitri, Svetlana and I had been travelling for days in the same clothes. Our flight from Domodedovo, very much pre-renovation, to Krasnoyarsk, had been cancelled three times. When eventually we emerged crumpled and exhausted from the aircraft, Dmitri having been assured of a new VIP service, there was indeed a red carpet, but we soon realised this had just been a delaying tactic so our luggage could be completely taken apart.

Dmitri’s parents Alexander Stepanovich and Ludmilla Petrovna had been commanded to stand there and wait for us at the end of the red carpet. They were by then the only people left in the entire airport and looking thunderous. Dmitri’s utterly, utterly wonderful parents are also rebels and I was mortified that they had been put in that position. The trip got much better from that point. The award ceremony was rather short. We were joined by Dmitri’s voice teacher Ekaterina Konstantinovna Yeoffel, a minuscule and terrifying woman who, when told by a guard to stop smoking, spat in the palm of her hand and stubbed the cigarette out in it. I was seriously impressed.

We were then free to spend a few absolutely amazing days on a boat built by Starikov, a friend of Dmitri’s father, sailing on the Krasnoyarsk lake, the largest man-made expanse of water in the world I believe, and extraordinarily beautiful. Once again, a large amount of alcohol was consumed, justified by a rumour that one should not be drinking the water and vodka was safer.

On one land foray into the forest, Dmitri found an axe and cut down a cedar tree, to Svetlana’s consternation without his glasses on. Taking out a section about three feet long, he solemnly presented it to me as a gift for my father. I have no idea how I got this log back through customs and all the way home. Some years later my father turned exquisite baby’s rattles from it for Dmitri and Svetlana’s twins Daniel and Sasha….

The rest of the article can be read within Dmitri Hvorostovsky: The Philips Recitals.

pictured: Dima with his mother

« Lars Vogt: ‘I love playing the piano but I prefer to be alive’