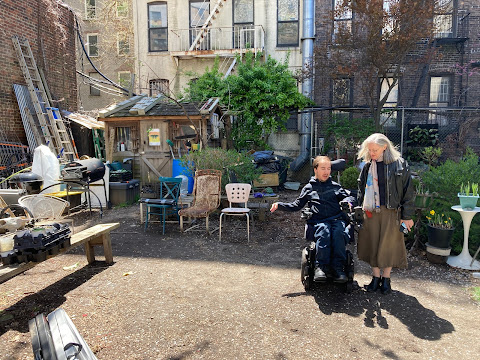 There’s a Handel opera in my NY community garden

Two months ago, I documented a really unique performance of Handel’s opera Orlando. It happened in a community garden in my East Village neighborhood of Manhattan, and the circumstances were serendipitous… I hopped onto a Citibike from my 1st Street apartment in the East Village, to this inaugural performance in Campos Community Garden (on 12th Street between Avenues B and C). I found a spot on a log to sit towards the rear of the seating area; and adjacent to that, next to a big tree, the artistic director Marianna Mott Newirth was trying to prop up an iPhone, standing on a teetering barstool in the soft garden ground. Kind of inevitably, to a gigantic collective gasp from everyone, she fell hard when that stool tipped over — miraculously, not injured, just bruised. The performance went on, and it was really exceptional: one of those “only in New York City” moments, surrounded with the charm of birds chirping, street noise, Springtime flowers, neighbors, passerbys, and burgeoning indie talent all around. After it was over, I told Marianna straight-up, I live a few blocks away from here, and filming stuff like this is something I do, and should I come back with cameras?

The former spirit of East Village artists, who’d just forge ahead and create things in community without waiting, started buzzing. And the next day (May 29th), I showed up an hour before curtain racing to set up all the audio and video equipment by myself — also, found a volunteer: a twenty-something named Belle whom I’d seen taking pictures the previous day, to hold a basic camera on a gimbal stabilizer (“steadicam”) from stage-right. She had never shot video, let alone operated a steadicam — but like everyone today, she grew up watching movies; and she knew the languages of framing and composition. She really nailed it; and to my huge surprise we came up with material for a really unique and compelling opera film, even if a little rough around the edges. Had it been too produced, it would have lost that community feeling; had it been indoors, it would have lost the surrounding splendor of flowers and environmental sounds and audience interaction, honoring instead of just singing to them. It shows, namely, another path to a bright future for opera. And I’ve just never seen anything like this, after years searching far and wide on YouTube and beyond for opera in the outdoors, reinvented, reconfigured, scaled to an audience right where they live. As for Handel’s Baroque operas, this ironically feels closer to the intimacy and scale of how they were originally performed, if you set aside the historical distinction between royal court and commoner! The idea to perform opera only indoors, in a huge ticketed auditorium, is a much more recent development in the longer history of opera!

Not worthy of mention in the NY Times , so far as we can tell.

Artistic director, 37, is killed in US car crash »