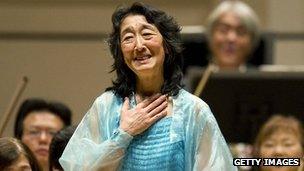 Arguably the greatest Mozart pianist of our time, Mitsuko Uchida and the Mahler Chamber Orchestra (concertmaster  Mark Steinberg), perform a program that draws a line from Henry Purcell’s  uniquely English form of Baroque music to Mozart’s Viennese masterworks. Playing and conducting from the keyboard, Uchida takes on a monumental programme of mostly Mozart but also Purcell and Bach.

Uchida is a revered figure of the concert stage—who gained renown early in her career for her complete recorded cycles of Mozart’s concertos and sonatas. This program features two concertos composed in the winter of 1785–86, when Mozart  was at the height of his genius: the A major concerto is best known for its magnificent slow movement; the C minor concerto for its bold inventiveness. Rounding out the program, the strings of the MCO are featured in a selection of fantasias by Purcell, brilliant compositions that cap an uncommonly fertile era of viol consort music.

« Welcome to the Suzuki Madam Butterfly