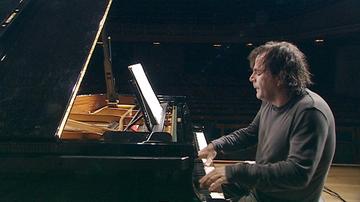 From an interview in Der Standard with festival boss Markus Hinterhäuser (pictured):

STANDARD: You announced weeks ago that you want to “act and not react” in the Currentzis case. So far you have done neither the one nor the other. Why?

Hinterhäuser: I’m happy to make a clear statement: We’re not working on alternatives. In the last few weeks, nothing has changed in our assessment of the “Currentzis case” you so apostrophized.

STANDARD: Are you sticking with Teodor Currentzis, even though he and his orchestra are financed by Bank VTB?

Hinterhäuser: Currentzis has never even remotely taken sides with Putin. He was one of the most prominent voices for director Kirill Serebrennikov, who was under house arrest. He was one of the main characters in Ilya Khrshanovsky’s “Dau” film, a harsh reckoning with Soviet totalitarianism whose broadcast in Russia was banned . Currentzis has made program changes in his concerts that can and should be seen as clear anti-Putin signals. And he wanted to give a benefit concert for Ukrainian refugees in Vienna.

STANDARD: Serebrennikov and the “Dau” film predate Currentzis’ move from Perm to Saint Petersburg. This started the dependency on VTB. Since then there have been no more political statements from him. Why is he no longer speaking out against Putin?

Hinterhäuser: In the past there was no law in Russia that could mean 15 years in prison just for using the word war. Currentzis’ musicians are not members of a state orchestra. They don’t have that security. At the beginning, Teodor Currentzis’ orchestra in Novosibirsk and Perm was docked to the state opera houses there. This is not the case in Saint Petersburg. Currentzis originally wanted to go to Paris with his orchestra from Perm, he also applied for the Theater an der Wien with the thought that Vienna might be willing to give this orchestra and choir a home. These attempts have failed. We should also consider that before playing executioner here.