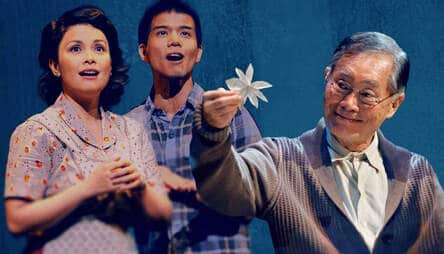 Do you remember Lieutenant Zulu from the original Star Trek? He was played by George Takei, now a Broadway veteran, and this 2016 musical was inspired by his life story. Set during the Japanese American internment of World War II, Allegiance follows the Kimura family in the years following the attack on Pearl Harbor, as they are forced to leave their farm in Salinas, California, and are sent to the Heart Mountain Relocation Center in the rural plains of Wyoming.

Directed for the stage by Stafford Arima, Allegiance  stars Broadway leading actors George Takei, Lea Salonga, Telly Leung, and a host of other Asian American actors and singers. The Book is by Marc Acito, Jay Kuo & Lorenzo Thione, Music and Lyrics byJay Kuo and choreopgraphy is by Andrew Palermo.

Alongside the musical, there is a documentary, “Allegiance to Broadway” which can be rented separately.
https://www.broadwayondemand.com/series/SAD5uSrEWh9k-allegiance–allegiance-to-broadway-documentary

UK orchestra on an anti-Putin tour »