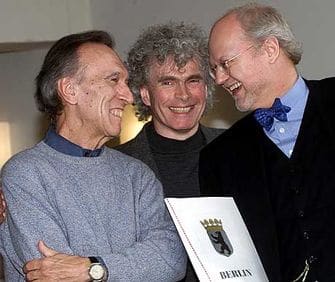 The German cultural manager Franz Xaver Ohnesorg will step down next year as head of the Ruhr Piano Festival, the last post in a high-flying vareer.

In 1999, Isaac Stern persuaded him to become Executive and Artistic Director of Carnegie Hall, where he resigned after a couple of years in a phone call from the cab that was taking him to the airport. Explosive office tensions were blamed. There was more to the story but the New York Times never sniffed it out.

Ohensorg flew from New York to Berlin where the Senate appointed him artistic director of the Berlin Philharmonic, seeing out the last years of Claudio Abbado and the arrival of Simon Rattle. He quit suddenly, once again after a couple of years, in circumstances that have never been clarified in any media.

Back went Mr No-Worries to Cologne, where for the past two decades he has been quietly running the Ruhr Piano Festival. He will be succeeded there by the musicologist Katrin Zagrosek.

« Pianist, 16, jumps in for deceased star

At the Met, you wear a mask for a blind audition »