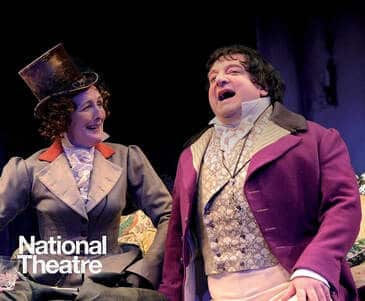 Time for a classic play? The National has just added this to its National Theatre at Home line-up. Dion Boucicault’s 1841 farce couldn’t ask for a better cast than Fiona Shaw and Simon Russell-Beale in two of the greatest comic roles of the English stage, in this brilliantly funny play.

London Assurance was first produced by Charles Matthews and Madame Vestris’s Company in March 1841 at the Theatre Royal, Covent Garden. It was Boucicault’s first produced play and first major success and its been in the repertory ever since.Sir Harcourt Courtly is lured away from the epicentre of fashionable London by the promise of a rich and beautiful bride, Grace, several decades his junior. Arriving at Oak Hall, Gloucestershire, he marvels at this rural Venus until her charms are eclipsed by her hearty cousin, the foxhunting Lady Gay Spanker. Meanwhile his disguised son turns up in flight from his creditors and falls head over heels for Grace. When Lady Spanker discovers the young couple, she needs little prompting from the visiting chancer Dazzle to lead Sir Harcourt astray.​
You can subscribe for a year or, if you only want to see this play, you can subscribe for a month, during which you have access to all the plays on National Theatre at Home and cancel within 30 days.

« This Austrian festival is clinging to straws

So how is this year’s third Peter Grimes? Channeling Jon Vickers… »