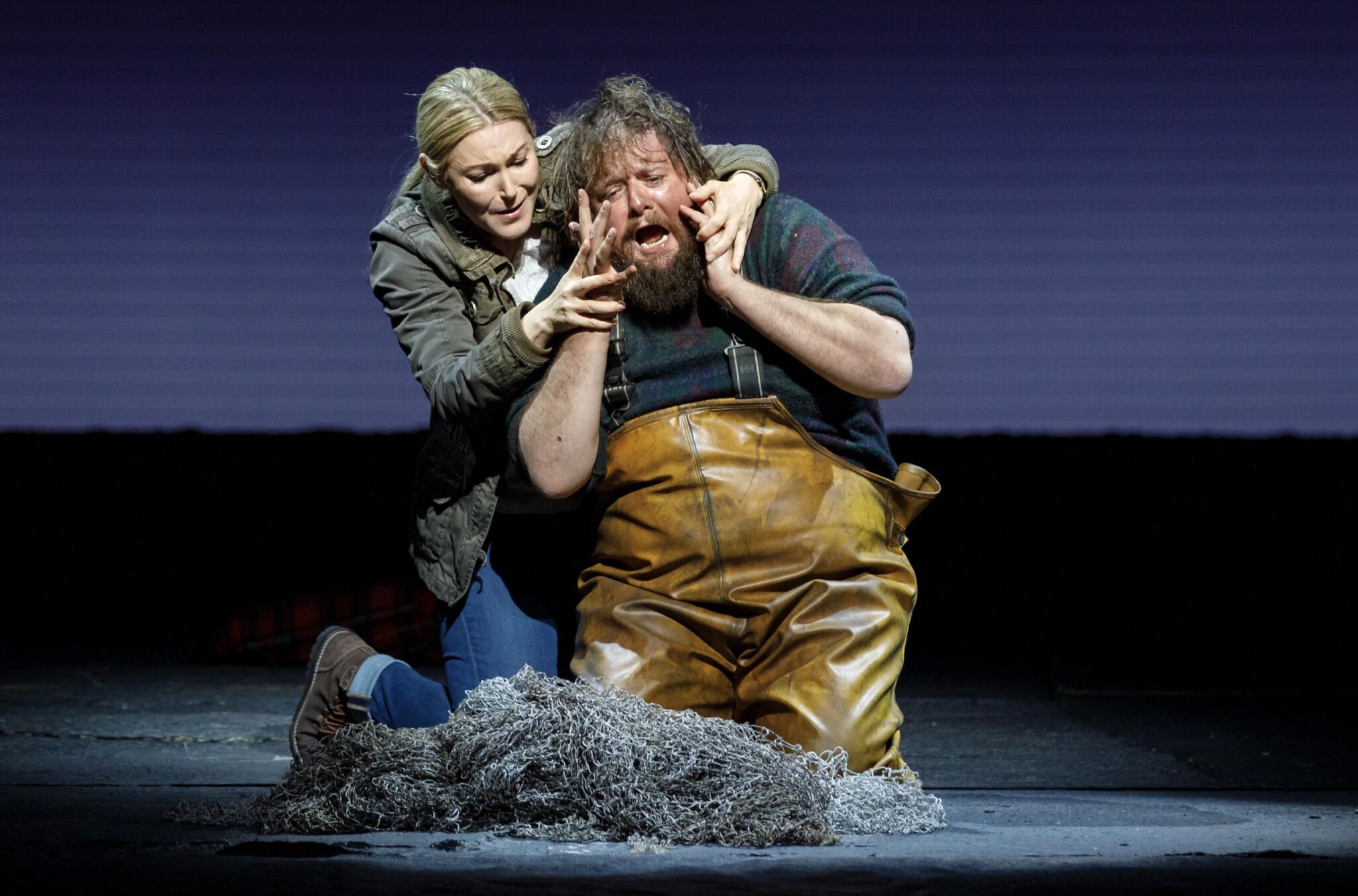 So how is this year’s third Peter Grimes? Channeling Jon Vickers…

First there was Jonas Kaufmann in Vienna. Then Stuart Skelton in Munich.

Alastair Macaulay, who grew up in East Anglia and saw his first Grimes 47 years ago, reviews the new show, exclusively for Slipped Disc:

Benjamin Britten’s first opera, Peter Grimes (1945), is one of the great works of the human spirit. A masterpiece of compassion, alienation, poetry, seascape, humour, humanity, tenderness, satire, soul, anguish, and despair, it has inspired a wide range of good and great productions. Britten went on to make works of yet greater sophistication and imagination, but in no other opera did he so marvellously fuse many strands into knockout theatrical power. For me, this is home music; I myself grew up close to the East Anglian coast Britten knew and evoked so well. But I’ve known Grimes make profound impressions at the New York Metropolitan Opera and at Glyndebourne. My experience of it goes back to the late Elijah Moshinsky’s legendary Covent Garden production, which I watched twice when new in 1975 (I was a rapturous nineteen-year-old) and several more times in succeeding years.

Watching Deborah Warner’s new, modern-dress, Royal Opera production on Thursday 15th, I marvelled that this opera could be reinterpreted in wholly original terms. Some of this staging’s imagery will, I hope, stay with me for the rest of my life. The opera’s Prologue, a town inquest that introduces us to the tragic Grimes and to his many quasi-cartoon neighbours, here is staged as the recurring nightmare of a Grimes who is drowning or indeed long dead. Horizontal on the floor, wrapped in the fishing nets of his profession, Grimes (Allan Clayton) rolls and rolls across the stage. The townspeople, tall silhouettes en masse, loom behind him and pursue him like phantoms. Individual faces are suddenly illuminated like grotesque Daumier caricatures. This suggests that Grimes’s torments will find no peace even in death.

Another drowned man also haunts this production: the apprentice fisherman who died while Grimes and he were at sea, the object of that Prologue inquest. But whereas Grimes in that first scene is floorbound, tossing and trapped, the ‘prentice is a soaring vision, seen only by us and Grimes. He floats down and up through the air, spinning slowly, helplessly, flotsam and jetsam, a helpless corpse forever gesturing for help.

The second time this ghost appears is in the pub scene at the end of Act One. The locals are all joining in the vivid canon of the marvellously stirring shanty “Young Jo has gone fishing”, but Grimes, seeing his dead apprentice high above them, adds a new vocal line in a vein of searing pain, cutting through the intricate ensemble with tragic perception. Peter Mumford’s lighting catches the many strands of this difficult pub scene as beautifully as, in Acts Two and Three, he catches the glitter of the North Sea’s waves.

The most strangely marvellous element of Britten’s opera is that its protagonist is also a poet. In this production, when he enters the pub, he turns his face to the door – his back to us – as he sings his most visionary words of all (“Now the Great Bear and Pleiades”). His thrilling alienation is all there in his inability to connect with the village community and in his need to describe the despair of human fate (“Who can turn skies back and begin again?”).

At Covent Garden, this is also a peak moment of music. Britten wrote the role of Grimes for Peter Pears, whose skills included the ability to enter, head-on and piercingly, the most exposed upper notes in the tenor register but without the power of chest voice. These were the antithesis of what suited the great Jon Vickers, the great Grimes from the late 1960s to the mid-1980s, whose chest tones were the very stuff of heroism; the heaving strain he brought to these lines remains unforgettable but far from exemplary. Allan Clayton, amazingly, combines much of Vickers’s dark chest power and Pears’s cleanly incisive attack: a superlative amalgam, combined with lucid diction, that makes Clayton a classic twentyfirst-century Grimes – and makes Britten’s opera new again. Another astonishing feature is that Clayton’s physique is not honed. He looks ungainly, a misfit, and yet physically expressive at every moment: we share his feelings by watching him.

The marvels don’t stop there. The cast contains two of the great interpreters of Wotan in Wagner’s Ring Cycle: Jon Tomlinson as Mr Swallow, Bryn Terfel as Captain Bulstrode, wonderfully authoritative figures who add terrific scale and generosity to this Borough tale. Maria Bengtsson, playing the schoolmistress Ellen Orford in jeans and sweater, sings this complex role (both compassionate and bleak) with a luminous beauty that often evokes the classic performance of the great Heather Harper on this same stage. Every character is individualized.

Mark Elder, conducting, makes every colour and line of this drama register, gleamingly. The Royal Opera Chorus doesn’t sing the witch-hunt calls of “Peter Grimes!” with the terrifying power it did under Colin Davis decades ago. At all points, however, this music lives from within.

Singing that is like butterflies at the edge of consciousness »