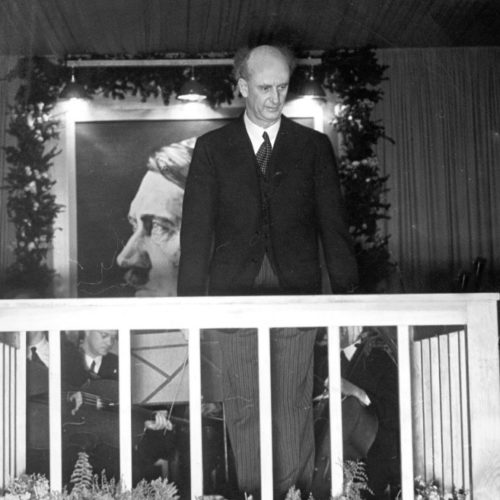 Can Gergiev be fairly described as Putin’s Furtwängler?

A number of commentators, especially in Germany, have been trying to make sense of the western consensus to ban a Russian conductor because of his intimacy with a criminal ruler.

The analogy of Wilhelm Furtwängler has been raised from the archives. Furtwängler, Hitler’s favourite conductor, headed the Berlin Philharmonic Orchestra throughout the Third Reich until he put his own safety above that of the musicians and fled to Switzerland in January 1945. He took no public stance against the regime and was seen on a number of occasions conducting beneath the swastika emblem, at the behest of Josef Goebbels. He was, however, not a member of the Nazi party, nor did he ever ( so far as is known) conduct in the occupied territories of Poland, Czechoslovakia, Holland, Belgium, Denmark or France.

Those duties were assigned to his younger rival, the party member Herbert von Karajan.

Gergiev, by contrast, has been a willing propaganda tool of the Putin regime. In 2008 he conducted a victory concert after Russia’s intervention in Georgia and Chechnya. He flew out to Syria at Putin’s command to preside over a ‘liberation concert’ at Palmyra. He has always been ready to drop everything and perform on behalf of the Kremlin, offering uncritical support to its ruler and a moral role model to musicians who might otherwise have rejected the regime.

Gergiev is implicated up to his eyebrows in Putin’s crimes as Furtwängler (or even Karajan) never was in Hitler’s.

These parallels need to be drawn, and refuted. Gergiev’s is Putin’s music master. They will go down in history hand in bloodied hand.

« US orchestras offer ‘a short history of cultural racism’

Playing the Titanic theme in a Kharkiv bunker »