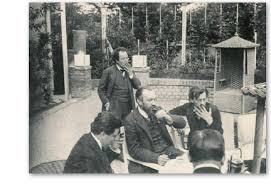 Why Mahler sometimes needs to be updated

We reported yesterday that Universal Edition had issued a heavily revised edition of the fourth symphony, taking in the composer’s final corrections from 1911.

It had previously issued a similarly upgraded edition of the fifth and second symphonies.

One of our readers describes the difference:

In one of the first years of this century, I was spending a few days at the Bregenzer Festspiele. For those who don’t know, Bregenz is the summer home for the Wiener Symphoniker, just as the Philharmoniker goes to Salzburg. They both perform the same functions: play some concerts and mostly serve as pit bands.

On this particular trip I was invited to a Symphoniker concert which announced only Mahler’s Sinfonie Nr. 5. I thought there must be something else. Surprise encores? (Actually, the one and only time I heard an encore after a Mahler symphony was a sad, sad event with Barenboim/Chicago at Carnegie Hall.)

As the concert approached I learned we were going to hear the world premiere of a new critical edition prepared by Dr Reinhold Kubik of the Internationale Gustav Mahler Gesellschaft.

For about 40 minutes, Dr Kubik stood in front of the orchestra and gave a fascinating lecture about his work on the new edition. There were over 700 corrections made from consulting every available source, including Mahler’s own marked-up scores and archival material from all around Europe, including (and I find this especially fascinating) the timings of each movement when Mahler conducted it himself, including performances at the Concertgebouw.

We were treated to “before” and “after” examples of the symphony. Some of them were jaw-droppingly astounding.

We then had an intermission and the premiere of the complete new edition.

I met Kubik afterwards and discussed his projects at IGMG and the performance we just heard. I remarked that I thought the adagietto was played a bit too fast, and Kubik explained to me why he though it too slow. Using archive sources like the Concertgebouw timings, it was determined that Mahler performed it between six and seven minutes. The performance that evening had taken a bit over nine minutes. I asked about some of the legendary recordings, naming in particular HvK and the later Bernstein, both of which drag it out to about 11 minutes. Kubik said, “Anything over 10 minutes is perverse” and sent me to the Bruno Walter NYP broadcast from 1947 which clocks in at 07:35. A good example of how not to lead it can be found on James Levine’s RCA recording (Philadelphia Orchestra) which lasts over 12 minutes.

Since then, when I hear Nr 5 I can actually tell if the orchestra is using Dr Kubik’s new edition, or an older one. These things do matter, especially if you are lucky enough to have someone illustrate the significant changes for you.

I believe the Rattle/Berliner recording was the first to use the new edition. Even so, his adagietto was played at about the same tempo as the Symphoniker had in Bregenz.

Watch: Kaufmann and Terfel beg people to come to Grimes »