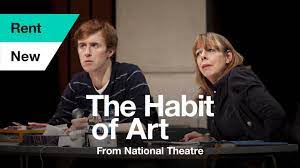 The Habit of Art – National Theatre at Home

Newly online, this was last play Alan Bennett wrote for the National Theatre under Nicholas Hytner’s leadership. I can’t promise vintage Bennett, it’s not a patch on The Madness of King George or The History Boys, but it still has much to recommend it.

It imagines a late life meeting between former friends, the poet W.H. Auden, and the composer Benjamin Britten, many years after they fell out during their collaboration on the opera Paul Bunyan. At this juncture we are asked to imagine that Britten has come to see Auden to ask for advice about Death in Venice, the opera he is currently composing.

Britten has in fact come to discuss his misgivings about the paedophilic theme of Death in Venice and the light that may cast on his own life, but Auden assumes Britten wants him to write the libretto. If Bennett had left it at that The Habit of Art would have been thoroughly enjoyable. But no. Bennett surrounds this momentous meeting with what seem to me extraneous plots and characters including a play within a play, a broken rehearsal with other actors, a rent-boy, and a BBC journalist who has turned up to interview Auden.

The big plus for me, though, in this fascinating but flawed production, is that it starred the late Richard Griffiths, one of the finest actors of his time (and one of the nicest men in show business) in the role of Auden. Alex Jennings does the honours as Britten with the professionalism and deep commitment he brings to all his roles. This original production was basically well-received and at least one critic called it, ‘a multi-levelled work that deals with sex, death, creativity, biography and much else besides’.

« Gergiev’s Mariinsky is performing with Covid