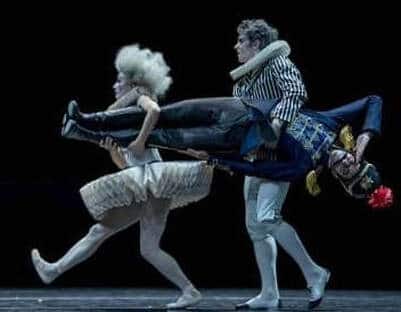 The Nutcracker and the Mouse King – Ballett Zurich
Click here for tickets : subscription tv
You didn’t think you were going to get through Christmas without a Nutcracker ballet, did you? This, however, is a rather different, expressionistic, Nutcracker or, to give it its full name, The Nutcracker and the Mouse King, from the Zurich Opera House. One of the most popular works of the ballet repertoire. Nutcracker, both the popular version and this new one, is based on a novella by E.T.A. Hoffmann, one of the most famous writers of German Romanticism. In Hoffmann’s 1816 original dark romantic fantasy, the story jumps back and forth from a dream to reality as it does here. When Alexandre Dumas and Marius Petipa adapted it as a ballet libretto in 1892, it lost much of its mystery and became the dancing snowflakes, pink tutus, and waltz of the flowers that we know today.

In The Nutcracker and the Mouse King choreographer Christian Spuck has distanced himself from the Dumas/Petipa version and put the literary origin at the heart of his ballet, emphasizing the fantastical nature of the original story.

In Rufus Didwiszus’ stage setting, the workshop of the godfather Drosselmeier turns into an old revue-theater, where the characters of the ballet come to life. Spucks’ choreography plays with the richness of characters in E.T.A. Hoffmann’s narrative cosmos, the absurdity and overwrought humour that inhabit them while at the same time looking down into the dark abyss of Romanticism.

Most of the excellent cast will be new to you. It is led by William Moore (The Nutcracker), Dominik Slavkovsky (Herr Drosselmeyer) Cohen Aitchison-Dugas (Mouse King), Mélissa Ligurgo (Mouse Queen),Michelle Willems (Marie), and Giulia Tonelli (Princess Pirlipat).

This is decidedly not The Nutcracker as you know it, although the music remains recognisably Tchaikowsky’s, played beautifully by the OpernZurich Orchestra conducted by Paul Connelly.