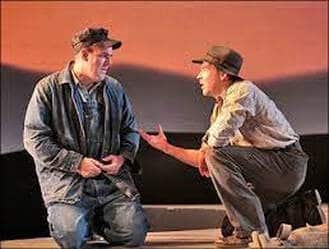 In Connecticut, the Westport Country Playhouse continues to mine its vault of archived captures with this, their 2008 production of John Steinbeck’s own stage adaptation of his classic novella, Of Mice and Men, directed by Mark Lamos. It is a story about two migrant ranch workers, best friends, who move from place to place, seeking work and the promise of the American dream during the Great Depression.

Steinbeck based the novella on his own experiences working alongside migrant farm workers as a teenager in the 1910s. One man is intelligent, though uneducated. The other is mentally disabled, and at the time Steinbeck was writing, the 1930s, even less than the period he was writing about, the 1920s, mental illness was unknown or, at least, undiscussed. This was the first sensitive and sympathetic treatment of a defective mind in the dramatic literature and, although it has been criticised for its profanity and racism, it remains a significant milestone. The novella was turned into a play immediately on publication in 1937 and a movie in 1939.

« Leading UK pianist has a blast at Brexit

A British pianist is among the latest Covid death toll »