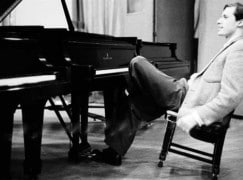 Another extraordinary discovery by Daniel Poulin:

While a student at Malvern Collegiate Institute (Toronto High School) Gould wrote a set of four piano pieces intended to be incidental music to Shakespeare’s Twelfth Night. He played them either as an overture to the play or during the intermission of the performance.
Gould himself recorded the fifteen minute Suite with a spoken introduction describing in his own words the four pieces. He was still a teenager at the time.
Here’s a review of the work by Kevin Bazzana, a Gould biographer:
“The first piece, ‘Nocturne’ in C major, is a strange, rhapsodic, often impressionistic mood piece. ‘Whimsical Nonsense’, in A minor, is a mischievous, jig-like scherzo in a Romantic style (think Mendelssohn, or perhaps Victor Herbert), full of scampering figuration. ‘Elizabethan Gaiety’, in D major, is a busy, jolly, Baroquish jig—an exercise in neo-Handelian pastiche. And the long finale, ‘Regal Atmosphere’, in A major, begins funereally but builds to a grandiose and highly ornate march.”
No score of the suite survives.
Gould was obviously an admirer of the greatest writer in the English language. As he said during interviews reported by Tim Page in The Glenn Gould Reader (pages 280-281):
“Shakespeare had the art of words. In a marvelous way he understood our faults, our strengths, how we struggle to live. Shakespeare used the word for dramatic reasons, but he also used the word for poetic reasons. He selected language which sounds to me like music. The words and the rhythms of the words are just like music to my ears.” 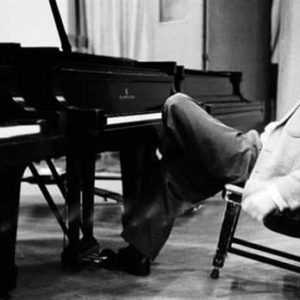 « Why can we identify colours but not notes?