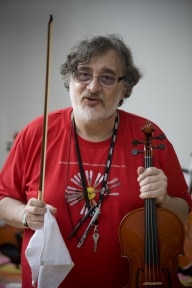 Chamber musicians the world over are mourning the death of Vladimir Mendelssohn, a formidable performer and teacher of Romanian origin who became a fixture of the festival season.

In 2005 he became director of the Kuhmo chamber music festival in sub-Arctic Finland.

Appointed professor of chamber music at the Paris Conservatoire, he also taught at The Hague, Essen and Bologna.

Tributes are pouring in on social media.

Sergey Ostrovsky writes:
Once I invited Vladi to play Brahms op.111 with the Aviv Quartet in the Wigmore Hall. Feeling quite uncomfortable, I had to tell him that the fee there isn’t great, but I suggest that he takes half and we take half…
He replied- Seryozha, this is not the way to play chamber music, but the only way I accept this concert is that, first we pay all the travel and the hotels of everyone, and whatever rests- we go and eat a great dinner with wine. That’s the way to play a chamber music concert …

« Verdi’s Requiem is performed without chorus after a Covid infection