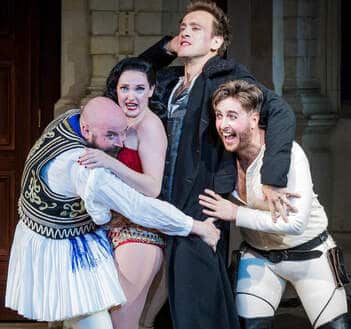 Digital performance available to watch online from 29 August at 7.30pm to 27 February

It’s the party to end all parties. But two entertainments have been double-booked to mark the evening’s climax – a serious opera and a slapstick comedy. The star soprano is throwing a tantrum and the staff are hiding the chaos from the boss. There’s only one solution: perform both shows at the same time.

This is a brand new concert staging by brilliant young director Louisa Muller. Among the specially selected cast are revered German soprano Dorothea Röschmann as the opera’s wronged heroine, Thomas Quasthoff as the house’s major-domo and prize-winning Scottish singer Catriona Morison as the composer.

As an opera within an opera and as a sly commentary on the struggles between high culture and low entertainment, Strauss’s comic creation was far ahead of its time. Bursting with life, vigour and humour, it’s also an opera that shows you can rediscover love in even the most unexpected places.
​
Sung in German with optional closed captions in English.

« Death of a pioneering ethnomusicologist, 91

Prince Charles: My passion for Wagner »