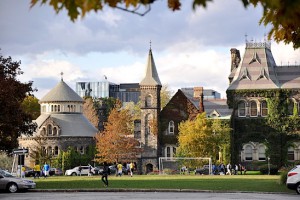 Since I began at U of T and for years before, a colleague consistently harassed nearly every woman in the theory department with varying degrees of threat/severity over the course of several years. Although individual profs were supportive and tried to help us, he was reported to the senior administration over and over and still nothing changed, and we were left to try to protect each other and figure out ways to deal with it on our own. I know I had it “easy” compared to others, but I was still scared to come into the building at times because I knew he would be there and I knew that if something happened I would have no protection — because if the administration wouldn’t help my friends, what chance did I have? It broke my heart to see the people I care about suffer, and to know that this person likely targeted undergraduates too, who are even more vulnerable, and to know that there was nothing that we could do because the faculty refused to protect its students.” (Third Year, PhD Theory)