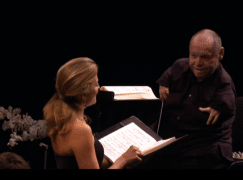 Quasthoff makes comeback in Berlin theme at the Edinburgh Festival

This summer’s programme has just been rolled out and here’s what first caught our eye:

Thomas Quasthoff features in three performances across the Festival, appearing in Ariadne auf Naxos as the Major Domo, leading three of Germany’s leading jazz performers for an intimate evening of vocal classics and hosting two public masterclasses with outstanding young singers to demonstrate everything that goes into an exceptional performance.

That’s quite a double coup.

Here’s the rest:
– Two operas-in-concert featuring two of the world’s most celebrated sopranos. A new concert staging of Ariadne auf Naxos stars Dorothea Röschmann in the title role alongside David Butt Philip as Bacchus. Composer Errollyn Wallen continues the story of Dido and Aeneas in Dido’s Ghost, interweaving the music of Purcell’s original tragedy within her own new opera which stars South African soprano Golda Schultz.

– Nicola Benedetti in residence across two weeks at the Festival, appearing with the Benedetti Baroque Orchestra, with a specially selected ensemble in Stravinsky’s The Soldier’s Tale and in a solo performance The Story of the Violin.

– Scottish Opera returning to the International Festival with a new production of Falstaff by Glasgow-born director Sir David McVicar.

– Leading orchestras from across the UK including the Royal Philharmonic Orchestra conducted by Vasily Petrenko and featuring Isata Kanneh-Mason, the London Symphony Orchestra led by Sir Simon Rattle, the Chineke! Orchestra with William Eddins and the BBC Symphony Orchestra under the baton of Dalia Stasevska.

– Global figures in classical music leading and performing with Scottish orchestras, including two concerts with the Royal Scottish National Orchestra, one conducted by Valery Gergiev and featuring Daniil Trifonov and another led by Elim Chan with Argentinian cellist Sol Gabetta. Marin Alsop conducts the BBC Scottish Symphony Orchestra in a programme including Beethoven’s Fifth and Kazushi Ono leads the Scottish Chamber Orchestra.