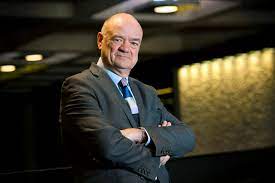 The City of London’s Barbican Centre has been thrown into turmoil after it was announced that Sir Nicholas Kenyon, its leader for 14 years, will step down in September.

The immediate cause appears to be an investigation into ‘institutional racism’ on his watch, following a Guardian report which indicated that non-white staff were excluded from permanent jobs.

Kenyon, 70, said he had been planning for some time to step down.

According to the Times: ‘He will undertake new work in music criticism, writing and research. He is understood to be taking a role at the University of Cambridge’s music faculty.’

The Barbican said in a statement: ‘We fully recognise the pain and hurt caused by these experiences. We are committed to pursuing the ongoing programme of action, which we have laid out to advance anti-racism in the organisation, and to achieve necessary change.’

What the sedate Barbican needs is a young leader drawn from outside the Metro bubble. What it will get is another collar and tie.

« Covid be damned, Mirga’s back with a Weinberg blast

Pretty Yende shows she had the right papers. It’s the police who were racist »