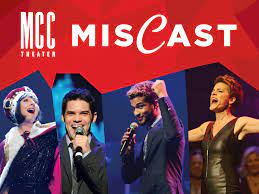 Miscast  at MCC Theater is an annual joke that Broadway tells on itself – men sing songs written for women, girls sing tough guys, elderly singers sing about Spring and youth, and they all have a wonderful time measuring their considerable talents against a song they could never, in a million years, expect to sing in the show for which it was written. It features the biggest Broadway stage stars singing songs from roles in which they would not traditionally be cast.

​This year’s list of participating artists is enormous. I count some 35 star singers and actors but I may have missed some. . To pick out just a few – Idina Menzel, LaChanze, Kelli O’Hara, Hugh Dancy, Jennifer Garner, Laurie Medcalf, Marisa Tomei, and Lin Manuel Miranda.