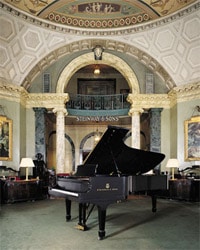 America inflicted Steinways on the world

Reader’s Comment of the Day from Bernard Chevilly in Orléans, France:

Steinway & Sons pianos are in almost every concert hall in the world because the Allies imposed them after World War II. The most prestigious European concert grand piano was, until then, the C. Bechstein, but the Bechstein family, since the early 1930s, were close to Adolf Hitler (Helene Bechstein wanted to marry Hitler to her daughter) and therefore Nazis. The Soviets and the Americans reduced the Bechstein factory in Berlin to ashes in 1945. The Steinway, an American piano of ancient German origin (Heinrich Steinweg), but genuinely “American”, was then produced in Hamburg. Throughout the second half of the 20th century, Steinways gradually took over all concert halls in Europe and, by extension, on other continents. To conclude: the massive presence of the Steinway & Sons, manufactured with the unconditional financial support of the USA in Germany, was a political decision, totally unrelated to music. This is why major brands such as Fazioli, Bösendorfer or Steingraeber & Söhne cannot compete at all in the world market for concert pianos.

Violin found in attic is a 1705 Guarnerius »