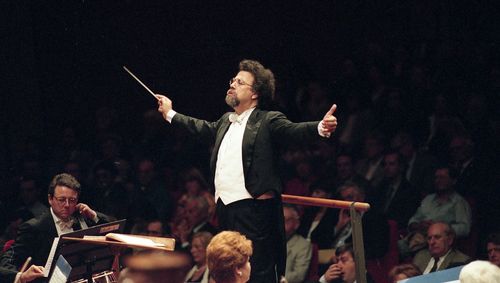 When conductors die in action

Twenty years ago I published an account of the tragic death in action of an important conductor. I reproduce it here, unaltered.

THEY buried Giuseppe Sinopoli in Rome on Monday, before the shock had fully set in. There are few events more stunning than a death at the opera. Two thousand men and women, suspended in a state of self-willed disbelief, are confronted with mortal reality as the conductor crashes to the floor. Doctors clamber into the pit to apply heart massage. Dazed, the audience cluster in chandeliered foyers and the musicians in backstage warrens until an announcement prompts them silently, disconsolately, to disperse.

The tragedy is not as rare as it might seem. Maestros are popularly invested with mythical powers and expected to live to a biblical age. Stokowski was still conducting at 95, Pierre Monteux at 89. With six hours of upper-body exercise a day and plenty of mental stimulation, they ought to live for ever. But Sinopoli’s death exposes the underside of the myth. At least nine have died at work; several others survived close shaves. Contrary to common assumptions, conducting can be a health hazard.

Friday began as one of the happier nights in Giuseppe Sinopoli’s often turbulent life. Bearded and beaming beneath a trademark broad-rimmed hat, the conductor was returning to the Deutsche Oper in Berlin, a house he had stormed out of in 1990 after a row with its director, Gotz Friedrich. Two years ago, Friedrich flew to Rome to make peace. Sinopoli, now 54 and head of Dresden’s Staatskapelle, agreed to conduct a Verdi-year Aida in a spirit of renewed friendship.

Last December, Friedrich died. Sinopoli dedicated the premiere to his memory and wrote a fond note in the programme about their philosophical conversations on principles of hope and utopia. The whole of cultural Berlin turned out for the premiere.

On entering the pit, and returning after the interval, Sinopoli was greeted with ovations of demonstrative warmth, to which he twinkled his appreciation through rimless glasses. He struck up the third act and was approaching the Nile-side duet between Aida and Radames around 10 o’clock when he fell to the ground. Musicians in the orchestra shouted for a doctor. Emergency resuscitation was administered and he was whisked to a heart clinic, but to no avail. Time of death was recorded at 23.15.

“I was sitting just two rows behind him,” said a leading financier, numbed with shock. “He just went down like a tree.” Along the same row sat the America baritone Thomas Hampson, whose mind flashed back to the night in June 1989 when he was singing Barber of Seville in Munich and the conductor, Giuseppe Patane, crumpled in a heap and died hours later in hospital. Patane, a superb trainer, was 57 and about to become head of Rome Opera.

He was the third to succumb in Munich. Felix Mottl, 56, collapsed in 1911 while conducting the 100th performance of the superstition-laden Tristan und Isolde. Legend has it that he fell just as his wife, Zdenka Fassbender, was singing Isolde’s aria Death-doomed head, death-doomed heart. Joseph Keilberth, 59, died in Munich in July 1968, moments after conducting Tristan’s aria, Let me die, never to awake.

These fatalities so alarmed Herbert von Karajan, Keilberth’s exact contemporary, that he endowed a unit at Salzburg University to study the effects of physical stress on conducting. Other maestros exchanged macabre speculation as to whether they were more likely to die in fast or slow passages. The evidence is mixed.

Dmitri Mitropoulos, the giant Greek who was Leonard Bernstein’s predecessor at the New York Philharmonic, expired during a 1960 La Scala rehearsal of the stately opening movement of Mahler’s Third Symphony. We know exactly where he died because the second bassoonist drew a cross in his score at the 86th bar, noting: “In questa misura e morto il Maestro Mitropoulos.”

Jansons’s son, Mariss, had a near-death experience in Oslo in April 1996, seven minutes before the end of La Boheme. As he slid to the floor, still waving his baton, Jansons felt that “in the dark I was struggling with a machine that was crushing my chest from both sides”. Luckily, Oslo is a small town and the nearest intensive-care unit was only two minutes away.

A pattern begins to emerge. All but two of the conductors who died at work were in their fifties or early sixties. Van Beinum and Sinopoli were compulsive smokers. Konwitschny was a heavy drinker, known affectionately as Kon-whisky. Jansons father and son had a genetic predisposition to heart disease. Their peripatetic, late-night concert lives did not facilitate a low-cholesterol diet. There are ticks in every negative box of their health profiles.

Then there is the small matter of stress. Where Mottl led a sedentary life, disturbed only by marital dramas, the modern conductor spends much of his time on a plane shuttling between engagements, managing distant working relationships. Sinopoli led the Philharmonia Orchestra in London for a decade. He brought the record contract, they played the music. Neither affection nor contentment passed between them. Such pragmatisms, financially rewarding but emotionally draining, take their toll. So, too, do the tax and investment strategies for substantial incomes – typically $2-5 million annually for a top performer.

In Dresden, among East Germans, Sinopoli was an exotic attraction. In Bayreuth, where he enjoyed repeated success, he became the first Italian since Toscanini to conduct a Ring cycle. He was also due to play a prominent role in the post-Mortier Salzburg Festival, headed by his friend Peter Ruzicka.

Sinopoli balanced his musical ambitions with a healthy range of external interests. His family life was solid and his friendships strong. A fascination with Freudian psychology invaded and, at times, destabilised his symphonic interpretations, which many found wilfully distorted but some appreciated as an intellectual fancy.

Like Freud, he collected objects of the ancient world, exhibiting his Greek pots in Bonn last year and so impressing the senate of Rome University that they were about to award him this week a doctorate in Egyptology. He was, in many respects, a Renaissance man – not least in having qualified as a medical doctor before he began to practise music. Like many doctors, however, he neglected to observe his own symptoms or take elementary precautions for a man entering the high-risk age range of a stressful occupation.

“These guys need regular screening,” warns Dr Romeo Vecht, a senior cardiologist at London’s Wellington Hospital. “Put them on the bicycle, take an echocardiogram. You can’t always win, but you can pick things up early enough to save lives.”

It is too late to do anything but mourn poor Sinopoli and comfort his family. But, if his death alerts other conductors to check their blood pressure, it will not have been entirely in vain. And, if it prompts audiences to adjust their maestro fantasy from superman to health plan, that too will be a worthwhile step in the direction of cultural sanity.

Nothing new in this week’s Vienna Opera stream »