James Levine: An unaffectionate tribute by the Metropolitan Opera

The Metropolitan Opera has crafted these unloving words in memory of its former music director whose death was made known today:

The Metropolitan Opera honors the memory of former Music Director James Levine, who held the musical reins of the company for four-and-a-half decades.

Maestro Levine conducted more than 2,500 performances of 85 different operas at the Met, starting with his company debut in 1971 leading Puccini’s Tosca. Celebrated for shaping the Met Orchestra and Chorus into the finest in the world, he was also responsible for considerably expanding the Met repertoire. Levine conducted the first-ever Met performances of Mozart’s Idomeneo and La Clemenza di Tito, Gershwin’s Porgy and Bess, Stravinsky’s Oedipus Rex, Verdi’s I Vespri Siciliani, I Lombardi and Stiffelio, Weill’s Rise and Fall of the City of Mahagonny, Schoenberg’s Erwartung and Moses und Aron, Berg’s Lulu, Rossini’s La Cenerentola, and Berlioz’s Benvenuto Cellini, as well as the world premieres of John Corigliano’s The Ghosts of Versailles and John Harbison’s The Great Gatsby.

Levine became Principal Conductor of the Met in 1973 and Music Director in 1976. He founded the Met’s Lindemann Young Artist Development Program in 1980 and the Met Orchestra’s annual series of concerts at Carnegie Hall in 1991. He performed with virtually every major opera singer of the past half-century. A book and documentary film celebrating his 40th anniversary with the company were released in the summer of 2011.

Despite his undeniable artistic achievements on behalf of the Met, his relationship with the company frayed in the wake of allegations of sexual misconduct, and in 2018 he was removed from his position as Music Director Emeritus after a three-month investigation by outside counsel. His final appearance at the Met was leading a concert performance of the Verdi Requiem on December 2, 2017. 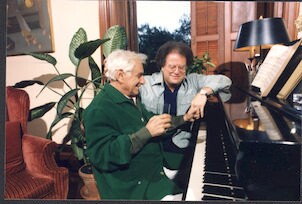 By way of warm contrast, the American soprano Aprile Millo writes on her social media:

… In James Levine I lose personally someone who changed my life. There is often much talk about how he ran from confrontation, or wasn’t a loyal friend, it was completely the opposite in my experience with him. He gave me marvellous truths dressed in challenges, he gave me praise that I will never forget, and he was one of the truest friends I ever had. The industry that we both serve is often another place for friends because people smile at you and then they will kill you from behind your back. This is not to say I wasn’t ever disappointed but I will never forget his friendship, his vision, and ultimately his majesty as a Maestro. What colours and what beauty and what energy he could elicit from an orchestra….

« Tim Page on the magnetism of James Levine