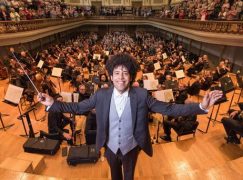 Why are major orchestra unable to pick a music director?

The symphony orchestra of Montreal, Canada, headless since Kent Nagano stepped down last year, invited the usual slew of hopefuls and put them through their paces during Nagano’s last two seasons.

The Venezuelan Rafael Payare, 40 and mid-career, made his debut in September 2018 with Schoenberg’s Verklaerte Nacht,’ Mozart’s 3rd violin concerto with the concertmaster as soloist and Beethoven’s Eroica. The players liked what they saw and told the selection committee.

Talks began with his agents, AskonasHolt, who held out for a big five-year deal, in exchange for 14-16 weeks a year. The agreement was sealed in the Covid New Year. Everyone seems happy.

So why are more famous orchestras like the Concertgebouw, Bavarian Radio and Paris Opéra finding it so hard to appoint a chief? So much so that the C’bouw thinks it won’t find the right person before 2025?

Because they have got so puffed up on self-esteem that only a ‘big’ name will suit their supposedly elevated status. So they get fixated on fame and paralysed in the search. They have forgotten the simplicity of the process. See one, like one, talk to the agent, sign one.