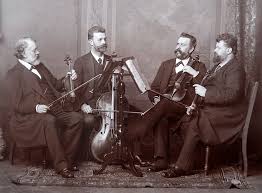 When Beethoven passed the age of fifty, he appears to have stopped caring how his music would be received, or even if it was performable. At fifty he had outlived the average Viennese lifespan by a full decade. He was totally deaf, in constant pain and unable to appear on stage unaided. He was also still financially insecure, forever in search of commissions, gifts and publishing deals. The world’s most admired composer did not know if he would have enough money to see out the year. Suddenly, regardless of need, he decided that now was the time to unleash the music that had long simmered within him, music that few could play or wished to hear.

Twelve years had gone by since he last completed a string quartet. The gulf between the 11th quartet and the 12th is one of the greatest in the art form. The 11th quartet was serious in title and intent but approachble in content. The 12th would mark the start of what posterity would rapidly and accurately catalogue as ‘Beethoven’s late quartets’.

On the surface, nothing changed. The 12th quartet is in E flat major, Beethoven’s happy key. It has the regulation four instruments, doing what a composer might reasonably expect of them. But from the opening attack, the listener becomes aware of destabilisation, of a composer undermining the foundations of his art. Twice in the opening movement he disrupts the flow of melody with a half-recapitualted opening theme, inserted for no obvious reason. The second movement is slow but far from dreamy: a set of six challenging variations. This is not easy listening. Wherever Beethoven offers an attractive theme, he hedges it with half-thoughts. In the finale, at around 2:40, he throws in a laconic take on the big number in the ninth symphony. What’s that doing there? you wonder.

Beethoven first planned the quartet in an unprecedented six movements before deciding that might place too great a strain on public tolerance. He started writing in 1822, while working on the ninth symphony, and finished three years later after an almighty struggle with the wayward finale. The quartet is 35-40 minutes long, twice the normal duration for the time. It was commissioned for the wedding of his cello-playing patron, Prince Nikolay Galitzin, who cannot have been entirely pleased. The first performance, given by the Schuppanzigh Quartet on March 6, 1825, was by all accounts atrocious.

Ignaz Schuppanzigh, who had the first permanent quartet in Vienna (or anywhere else), was a drinking pal of Beethoven’s and the man he entrusted to be concertmaster at the premiere of the ninth symphony. But Schuppanzigh was growing slow and fat. Beethoven called him ‘Falstaff’ and complaiend that he thought only of his own instrument and not the work as a whole. On this new piece, he lacked sufficient rehearsal time.

When Beethoven’s nephew blamed Schuppanzigh for the quartet’s failure the composer called in a rival quartet leader Joseph Michael Böhm, who has left this account of their exchange: ‘When Beethoven learned of the poor performance – for he was not present – he became furious and let the performers have no peace until the disgrace was wiped away. He sent for me first thing in the morning, and in his usual curt way said to me, ‘You must play my quartet,’ and the thing was settled. Neither objections nor doubts could prevail; what Beethoven wanted had to take place, so I undertook the difficult task. It was studied and rehearsed frequently under Beethoven’s own eyes. I said ‘eyes’ intentionally, for the unhappy man was so deaf he could no longer hear the heavenly sound of his compositions… With close attention his eyes followed the bows and therefore he was able to judge the slightest fluctuations in tempo and rhythm and correct them immediately. At the close of the last movement of the quartet there occurred a ‘meno vivace’ which seemed to me to weaken the general effect. At the rehearsal, therefore, I advised that the original tempo be maintained… Beethoven, crouched in a corner, heard nothing, but watched with strained attention. After the last stroke of the bows, he said, laconically, ‘let it remain so,’ went to the desks and crossed out the ‘meno vivace’ in the four parts.’

What Beethoven wrote in this quartet was just about within Böhm’s grasp. What came next would be beyond it (Schuppanzigh took over the later quartets). Outwardly conventional, the 12th quartet makes it clear that Beethoven is taking leave of public expectation.

There are more than 50 recordings of the quartet, a map in themselves of the history of string quartet playing. The earliest, in 1926, is by the Hungarian Jenö Léner and his quartet. It is aggressively romantic, contradicting Beethoven’s drive into the unknow. That said, the adagio is an overwhelming rush of emotion, irresistibly affecting and with accents that are more than faintly Magyar.

It was ten years before another record was cut, this time in Abbey Road and far superior sound, by the Busch Quartet – Adolf Busch and Gösta Andreasson (violins), Karl Doktor (viola) and Hermann Busch (cello). More austere than the Hungarians, they project a drawing-room atmosphere of family music-making, making light of the difficulties inherent in this score. Like Arthur Schnabel in the piano sonatas, the Busch Quartet recordings of the late string quartets became the industry standard and have stood the test of time The influence of their interpretation can be heard as far ahead as the Emerson Quartet, who recorded a whole lifetime later in 1997.

This is where we need to consider the concept of lineage in the string quartet. The leading ensembles are as full of begats as the Book of Genesis, claiming ancestry and authority at one or two removes from the quartet founded in 1869 by Joseph Joachim, who knew Mendelssohn, Brahms and Schumann. In the late works of Beethoven a link to Joachim confers the highest pedigree. Joachim was Hungarian (as was Lenar), German (Busch) and Jewish. His second violin was Carl Halir, whose star pupil was David Mannes, founder of the Mannes School of Music in New York. The American and Czech traditions of playing Beethoven string quartets are no less central to their evolution through such ensembles as the Juilliard, the FineArts and the Wihan.

But space is running out, and I’ll have to continue tomorrow.

« Concert agents talk to US Congress about relief

The Slipped Disc daily comfort zone (144): To plough and sow »