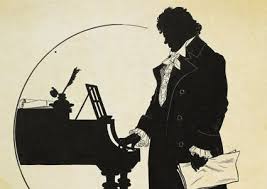 Beethoven jazzes it up

Beethoven wrote the last of his sonatas in just two movements, breaking yet another taboo. His assistant Anton Schindler claimed he gave up on a third movement because he was running late with the ninth symphony, a story not many believe though it’s the kind of remark the composer might have tossed out to deflect further questions.

When a Berlin publisher complained the manuscript was one section short and asked if the rondo-finale had got lost in the post, Beethoven responded with a barrage of grievances about misprints and short payments for his last edition. By this time in his life, into his fifties and in constant pain, the composer was disinclined to take backchat from anyone, no matter how much he needed their support.

So just two movements and an average length of around 25-30 minutes, although some intepreters take almost that long on the second movement alone such are the relativities of time in this most flexible and open-ended of last-word masterpieces. The slowest pianist is probably the Russian Anatol Ugorski, taking 11 minutes on the first movement and 27 on the second, in its way a remarkable and inimitable feat. You can pop out to the kitchen and make a cup of tea between one note and the next. How the pianist maintains a line at such extreme length is a marvel to behold.

The second movement also contains what some claimed to be the birth of jazz. At around three minutes in, Beethoven rocks the melody unevenly from side to side in what can only be described as syncopation. Boogie-woogie might be even more accurate. Not every pianist is happy with this description. The Hungarian pianist Andras Schiff has dismissed it as close to sacrilege. but even a German traditionalist like Wilhelm Backhaus finds it impossible to suppress the jazzy nature of this theme. Edwin Fischer, in a performance of otherwise massive assurance, seems to be using all of strength and intelligence in this passage to stop the rhythm running off his rails.

While it is highly unlikely that Beethoven was familiar with the musical idioms of African-Americans, the rhythmic variegation tells us that he had left Viennese tradition and expectations so far behind him that anything was possible in his last works, even atonality. Beethoven himself considered the work ‘not very difficult’ but pianists were long daunted by such incalculable markings as 12/32 and the new-fangled metronome that the composer recommended only served to confuse them further.

In his great novel of ideas, Doctor Faustus, Thomas Mann depicts a town organist, somewhere in Germany, giving a lecture on the opus 111 and its enigmatic conclusion. He sat on his revolving stool… and in a few words brought to an end his lecture on why Beethoven had not written a third movement to op. 111. We only needed, he said, to hear the piece to answer the question ourselves. A third movement? A new approach? A return after this parting – impossible!

This is not a work for a young artist to attempt. Ivo Pogorelich, who recorded it for Deutsche Grammophon at the age of 23, received such derisive reviews that he retreated into a shell of defensiveness that characterised the rest of his career. You can judge for yourselves how it sounds – after repeated listenings I still find it peculiar and immature. Harold Schonberg reported that at a 1985 Carnegie Hall recital he took a world-record 31 minutes and 31 seconds to get through the work. Pogorelich insisted that he was only doing what Beethoven wanted.

By contrast, the Canadian pianist Angela Hewitt waited until she was past 60 before attempting this summit. Next morning she broadcast the outcome on social media: ‘It’s done! I performed Beethoven’s Op. 111 in public for the first time last night at a friend’s barn in Devon for 65 people. On a Bosendorfer. Very intimate. I got all choked up just talking about it at the beginning of the concert…..let alone playing it. Now I have the rest of my life to try to play it better, but I’ve done it and that gives a lot of personal satisfaction.’

In assessing 150 recordings of this work, I shall limit myself to the most thoughtful interpretations. Fischer and Backhaus come instantly into contention. Friedrich Gulda joins them with an ethereal serenity that is almost a summation of the complete 32 sonatas.

But how easy it is for even the most accomplished artists to fall short at the last hurdle. Clara Haskil, more of a Mozartian than a Beethoven specialist, sounds as if her shoelaces have come undone on the pedals; I mention her only to show how easy it is for the most accomplished of pianists to stumble over Beethoven’s trickery with speeds and expression.

Alfred Brendel is ponderous in the opening movement, and sombre in the second, never quite illuminating the sonata as he has done so often through his cycle. Daniel Barenboim gets slower and slower as if the work wears on, as if he imagines Beethoven is running out of energy (which the 9th symphony assures us he isn’t). Arthur Schnabel is both heavy-handed and a bit scatty, less authoritative than his finest efforts. That said, I am seduced all over again by his rocking rhythms in the finale. Claudio Arrau‘s fourth and last recording is wondrously humane.

And what of Emil Gilels? This is one of three sonatas in the cycle that he left to last and never recorded, we know not why. His arch-rival Sviatoslav Richter weighed in with three recordings, marked by coolness and detachment. Of the Russians, Maria Yudina is the one who penetrates most fully and sympathetically into Beethoven’s last sonata.

Ronald Brautigam demands to be heard on a tintinnabulating early instrument and Fazil Say has a take on some phrases that is all his own. Among very latest releases, I am hugely impressed by Filippo Gorini and Pina Napolitano. (I haven’t yet heard Angela Hewitt).

But my listening is coloured by time and place, by the year of Covid and all its mortal losses and future uncertainties. To hear the notes of Beethoven’s last piano sonata as music is all but silenced in public places is to enter the darkness with Beethoven and to emerge, like him, with a message of faith and continuity. Mitsuko Uchida achieves an ethereal closure that resembles an act of transmission, as if Beethoven had not laid down his pen at the end of opus 111 but handed it, full of ink, to Schubert.

« The musicians who live in Rossini’s old house

In France, they dance naked ballet in a hotel »